Turkey’s terror network in Russian crosshairs
A careful analysis of the extensive Russian statements through the past three days regarding the tensions with Turkey suggests that Moscow has (all but) ruled out the conspiracy theory that Ankara took the fateful decision to shoot down the Russian jet last Tuesday with tacit encouragement from the United States.

Given the prevailing climate of Russia’s ties with the West, it should not have surprised Moscow that the NATO secretary-general Jen Stoltenberg expressed the customary support for Turkey’s territorial integrity or that President Barack Obama viewed Tuesday’s incident through the prism of the endgame in Syria. Importantly, Moscow would have noted that both NATO and Obama advised Turkey to ‘de-escalate’ with Russia and made it clear this was a matter between Ankara and Moscow. (See my blog US, NATO tell Turkey to ‘deescalate’ with Russia.)

Moscow has since invoked the recent Russia-US memorandum on ensuring the safety of combat aircraft operating in Syria “in which the US assumed the responsibility for observance of relevant regulations by all participants of the coalition it leads, including Turkey”.

Moscow has concluded after meticulous consideration of the circumstantial evidence of the case that Turkey committed a pre-meditated act. A range of explanations would be available as to why Turkey acted the way it did, but Moscow appears to have zeroed in on two of them principally: a) Turkey attempted to precipitate a confrontation between Russia and the western alliance that would disorient the Russian military operations in Syria; b) Turkey tried to derail the ongoing Russian operation in Syria’s highly sensitive border regions through which the main supply routes for the extremist groups (such as Nusra Front) pass.

Indeed, in Moscow’s estimation, Russian-Turkish relations can never be the same again. There is a deep sense of betrayal at the level of the Turkish leadership. At the very minimum, the Kremlin would have expected President Recep Erdogan to express regret over the incident. (Moscow has left still some time to the Sultan to do that, if he wishes to, by deferring a final decision on its retaliatory measures against Turkey.)

Clearly, the failure of Turkey’s diplomatic game plan to rally the NATO for a confrontation with Russia means that Moscow’s retaliation will remain ‘Ankara-centric’ and doesn’t become a ‘NATO issue’. Moscow has announced that it doesn’t intend to use force against Turkey. Put differently, Turkey will have no alibi to invoke Article V of the NATO Charter.

On the other hand, Moscow also will leave with Turkey no option but to accept as a new reality the Russian military operations in Syria’s northern border regions. In fact, by Wednesday, Russian jets were back in action in the very same area where the incident took place the previous day in even bigger strength to undertake a massive bombing mission.

The bottom line is that Moscow and Damascus (and Tehran) will not allow Turkey to carve out a ‘safe area’ or ‘no-fly zone’ in northern Syria. The thrust of the military operations is aimed at destroying Turkey’s supply routes for the terrorist groups. Russia estimates that the success of the war against the Islamic State depends critically on the destruction of the terror group’s supply routes from Turkey. Moscow has inter alia hinted that it has intelligence implicating some powerful people in the Turkish elite in the murky oil trade with the IS.

If the Iranian version of the mission to rescue the Russian pilot out of the clutches of the terrorist groups has any basis – Fars news agency has links with the Islamic Revolutionary Guards Corps – it can only mean that the Iranian intelligence has brilliantly succeeded in penetrating the terrorist groups and has a fair idea of Turkey’s clandestine activities in the border regions and its terror network. To be sure, there isn’t going to be any let-up in the Russian military operations in northern Syria. Tuesday’s incident – and the rescue operation – may have consolidated the Russian-Iranian-Syrian-Hezbollah axis at the operational level to a degree that wouldn’t have been conceivable last week.

As the military operations in and around Aleppo progress, Turkey will witness the systematic destruction of its command and control centres inside Syria, may be compelled shortly to pull back its Special Forces operating inside Syria and may witness its proxies facing a rout. Moscow, therefore, has openly announced a series of measures to make sure Turkey understands that faced with a stunning defeat in Syria, it is expected to exercise self-restraint. The deployment of the S-400 missiles is a clear warning to Turkey not to do silly things. Russia has also strengthened Syria’s air defence system. Turkish jets can no longer operate freely in the Syrian air space. Moscow has also ordered that fighter jets should give cover to all its future missions.

What Russia is getting ready to do to Erdogan is precisely what the West should have done to him long back. But then, expediency is the leitmotif of the Western policies toward Erdogan. Obama prioritizes the US’ access to Incirlink air base, while the EU kowtows to Erdogan (and even bribes him with billions of euros ) for not pushing the Syrian refugees toward Europe. Make no mistake that Obama knew jolly well about Turkey’s covert support or the extremist groups in Syria. If his V-P Joe Biden knew one year ago, he too certainly knew, but Obama chose to look away. The least that Obama can do at this point in the interests of international security, therefore, is to let Russia do the onerous job of destroying Turkey’s terror network, which he himself lacked the moral courage or the grit to undertake all this while. 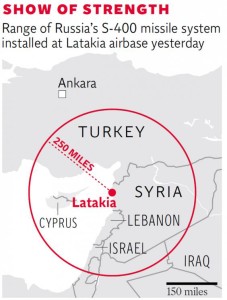