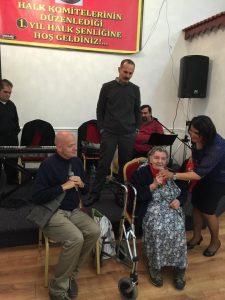 “We Did Not Come From The Same Wound/Mother But There is no Sibling Bond Beyond Us..”

International solidarity denotes the fresh blood of our struggle. Our Comrade Terri Gavin Mcweeney has passed away at the care home she was settled at. Terri, who died on June 25, 2020, was born in Ireland on September 3, 1931. Teri Mother was a veteran and she was as revolutionary as our TAYAD mothers (families of political prisoners). She sacrificed her entire life for revolution.

Although she was blinded in both eyes Terri Mother would not give up on conducting campaigns for prisoners. She would take a lead role at events – always persistent, determined, and supportive.

Terri always made an effort to support us by attending our picnics, gatherings, concerts, and embassy actions. She never gave up on taking great pains in supporting our struggle.

She worked for RepublAnti-International Group London for many years.
At times Terri would release out the mothers of TAYAD that she profoundly holds in her heart. Even in her sickbed she stood up for the Irish republican prisoners : her heart always pounded for their revolution.

Terri mother, who paid price for the independence and battle of the Irish people will forever live in our hearts and struggle. You sleep well. Starting with the Irish people’s resistance, we would like to send our deepest condolences to the peoples of the world. Terry mother is immortal…