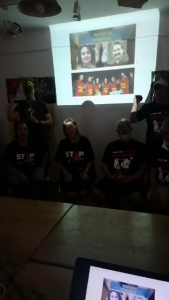 Migrante Austria and ILPS who commemorated Ka Fidel Agcaoili, a Filipino revolutionary who was chairperson of the Negotiating Panel of the NDFP National Panel and passed away in Utrecht (The Netherlands) on July 23.

Also a minute of silence was held for Randall Enchanis, another peace consultant and agrarian reform activist who was brutally killed in an extralegal execution in his house as a result of the Anti-Terror-Law by the fascist regime in the Philippines.

While condemning fascism in the Philippines and sharing the memories of these revolutionaries, also fascism in Turkey was condemned, who arbitrary detained the Yüksel Resisters early this morning in police raids.

The participants demanded immediately release of the Yüksel Resisters as well as of the People’s Lawyers Ebru Timtik and Aytac Ünsal who are in death fast for justice..

Solidarity with the fighters for justice against fascism and imperialism!
Long Live International Solidarity!