On September 18, 2013, the musician Pavlos Fyssas, was murdered by the bloody murderers of the fascist Golden Dawn party in the Keratsini district of Athens, and a commemorative march was held on September 18, 2020, starting at 18:00.

A memorial meeting and march was held on the seventh anniversary of the murder. The main slogan of this year’s commemoration is “PAVLOS IS LIVING, FIGHTING AGAINST THE NAZIS”. At the same time, on October 7, a verdict hearing will be held for the murderers of Pavlos Fyssas, and they seek punishment for the criminal organisation, the bloody fascist party and the murderers. They carried banners and signs.

Communist parties of Greece, left parties, anarchist organisations, democratic institutions, the People’s Front of Greece and the Anti-Imperialist Front participated in the commemoration.It noted that  it is imperialism that is responsible for crises, unemployment, poverty and refugees. Let’s unite, organise and fight against imperialism. They participated with their banner and carried red flags.

During the march, the People’s Front shouted its slogans. 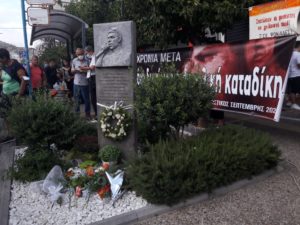