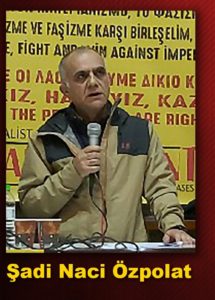 Sadi Naci Ozpolat is a Marxist-Leninist revolutionary who has waged an anti-imperialist anti-fascist struggle. He fought for the independence and freedom of its country in Turkey for many years, has been imprisoned for years, has been tortured, has undergone the world’s largest prison operation, the December 19-22 (2000) prison massacre, and has been on the death fast resistance.

Sadi Naci Ozpolat, who was kept away from his country by fascism, and spent seven years in captivity in Europe, in Germany and France.

He showed great dedication and effort in the work of the Anti-Imperialist Front, which fights against imperialism and fascism.

He has worked night and day to step up the struggle in his country, and as a result of the collaboration of the states of Greece and Turkey, he has been imprisoned in Greece for the second time.

There has been no lack of repression and isolation in Diavata prison, where he has been imprisoned.

None of his books are given to him, and the right to visit him has been taken away.

Sadi Naci Ozpolat has started an indefinite hunger strike for the right of books and opinions since October 14 against these pressures and usurpations of his rights.

Let’s call Diavata prison and put pressure for their demands to be accepted.

As the Anti-Imperialist Front, Let’s write letters to the prison, and not abandon our comrade Sadi Naci Ozpolat.

End The Crackdown On Revolutionary Prisoners In The Jails