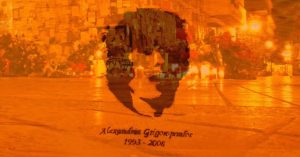 “A Cry Rises In the Middle of Athens, The Cry of Rebellion, Hope, Salvation This Cry, Where Pain Turns to Anger, 12 Years of Resentment” A cry rises, this cry is the cry of rebellion, this cry which says, “Stop!” This cry can occur somewhere at any unexpected time. In a dusty working-class neighbourhood, in a narrow street, or in a university lecture hall, in the crowd of a city centre, at a corner, at a bend, it gushes out like water from a rock roof. The face of poor blacks from Soweto to all of South America. The face of Mexican peasant women or a factory worker occupying his workplace from Argentina to Uruguay, a Palestinian insurgent in the Intifada. The face of the people resisting at the barricades in Spain or Italy. And it is the face of those defending Moscow or Stalingrad, who say fascism shall not pass. The face of workers going to work on a Monday morning before dawn. This is Berkin, a face of the tired but proud streets of Okmeydanı, painted gray. This is the face of Alexis in the middle of Athens. This face is known to the whole of humanity, this face is the face of humanity’s revolt, rebellion and opposition to tyrants and despots, against ruling powers, against fascism. That’s why the cry rises, our cries rise from these faces. This cry rose in the middle of Athens, when Alexis was shot one afternoon in a narrow street of Athens.

“Workers shout for bread, Merchants shout for Sunday. In the past, the unemployed were hungry, now those who have jobs are hungry. Those who remove the meat from the table are teaching, those who say always me, always me, want self-sacrifice. The crammed eaters are telling the hungry about good days to come. ” Our cries are the cries of hunger, poverty and injustice. The reason for this is those who wipe their hands with money, the sovereign powers, those who submit our countries to the obedience of imperialism. Those who do not run our own land are those who put our factories, water, plains and mountains at the service of the imperialist monopolies. In the neo-colonial countries of imperialism, hunger, torture, poverty and national crisis are continuous, this crisis is sometimes shown as being controlled by token reforms and laws, but they can never hide this crisis. In this system, where independence is understood as a flag and national anthem, the aim is not only to transfer the natural resources of the colonial countries to the imperialist countries, but also to create a weak, even assembly industry in the country, It was to expand the domestic market and to realise a more reckless exploitation by taking advantage of the cheap labour of the colonial countries. Imperialism and its mafia, the IMF, are putting the colonial and neo-colonial countries in a debt trap under the name of aid, it is they who cause the crisis, they are the ones who exploit domestic and foreign resources, occupy our countries with their private schools and foreign brands, and then make them dependent on them under the name of aid… This dependency grows economically, militarily and diplomatically. If American imperialism sneezes, the neo-colonial countries will get sick. 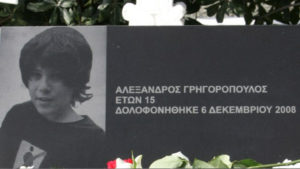 As the crisis of ruling imperialism and collaborationist powers grows, the only solution is to increase their pressure and their only solution is to attack, silence, and intimidate. Behind the created empire of fear they seek to protect their power. We have watched the same scenario in different ways in all countries. As their crisis deepens, their understanding of democracy, prosperity and civilised culture disappears suddenly, they can do whatever they want. People do not have even a single voice against this. They raise taxes, increase working hours, cut salaries, the social state, the needs of the people are not important to them. And besides all these, they say sit down and the people who oppose this attack, are detained, tortured and arrested them. State forces roam the streets of the city en masse with their horror mask. They take law enforcement onto the streets, prohibit marches, demonstrations. The Neo Demokratia government in Greece applied the same policies, it did not hesitate to openly display fascism by calling the economic crisis the crisis of imperialism, numerous austerity policies It is a decade of hostility to the people and it still continues because crises will continue to exist as long as the reality of imperialism exists. 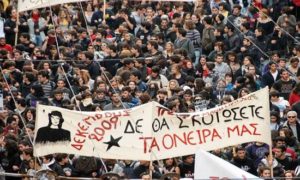 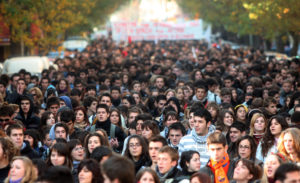 The Nightmare of Their Crisis Will Be The Peoples!

The terror dictatorship and attacks against the people will not change anything for the peoples, the organization of counter-violence is a law of nature, where the pressure is no longer there, an outcry, the breaking of the water’s dam, it was the beginning of the Greek people and the breach was opened once. Lenin had said that the century would be an epoch of uprisings, and the cry of the age of uprisings was heard and this cry spread from Anatolia to Europe, to Latin America. This cry rose from a street of Athens, and then hundreds of thousands of people listened to this voice and amplified it. “Centuries of history has taught us a lot, even if bombs and cannons were thrown at us We will put the black and red flags in front of us, even if they massacred them, even if they spend our beautiful years. We need to fight for a more free and new life, for our freedom. 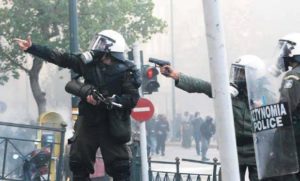 ” Alexis fell as an outcry. At the age of 15 in the middle of Athens, it became a cry, a light in the struggle of the peoples for justice. Koumis, Kanolopoulou, Mixalis Kaltezas and Alexis were not the first, this was the true face of fascism, terrorist, attacking, murdering, torturing, arresting, turning the existing crisis into oppression and violence against the people. The people of Greece resisted and resisted against fascism with their own legitimate defence. The history of Greece is a history of resistance and has never surrendered to dictators. The people of Greece, today’s dictators are imperialism and their indigenous collaborators. It is this state that kills our people in the middle of the street, that turns our lives into poison, who robbed us, stole our labour and presented it to the imperialists on a golden tray. A fire of revolt would be lit, a fire of revolt would break out … Alexis is an avalanche of rebellion now. Alexis stands up for the peoples, means to tell the oppressors to halt. Alexis is a flag of rebellion in our hands. The cry of Alexis was heard and hundreds of thousands of people took to the streets behind that cry, to destroy and rebuild, to reclaim what was stolen from their hands, for their children shot at the age of 15 in the middle of the street. This cry spread from Greece to all over Anatolia.

The Order Whether he lives in China or is struck down in the far south of Africa, if he is in a fight for humanity in chains

Whether he is holding a rifle with a drum or an arrow or an axe,

He is my brother, he is my companion. 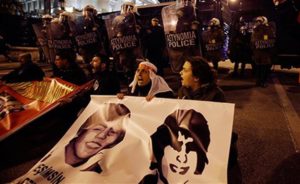 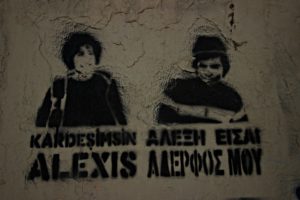 Also our participation in Turkey was the same, people were our brothers and comrades, to extend Greece’s Taksim barricade of that screaming barricade. “Nothing in nature lives for itself, rivers do not drink their own water. Trees cannot eat their own fruit. The sun does not heat for itself. The moon does not shine for itself. Flowers do not smell for themselves.The earth does not give birth for itself. The wind does not blow for itself. Clouds do not get wet from their own rain.”

Everything lives for each other. Living for each other is the law of nature. The cries of rebellion and anger were the same, we were the people and could not be separate from each other, our class has been known for centuries and our class interests have been in common. Our only salvation is our solidarity and growing struggle, The peoples have no friends other than the peoples, and the only salvation lies in the revolutionary internationalist solidarity of the peoples. You are my brother, Alexis, you are my brother Berkin, this cry echoed in different languages, different faces, in different streets, and turned into a weapon to the guardians of fascism. The cries of the revolt were showing us the streets, the streets were the people, and the peoples burned the fire of the revolt in the streets to get the justice of the people and to get what they have right. This fire of rebellion is growing and will bring the end of the ruling classes and imperialism. As their attacks increase, they will see the self-defence of the people confronting them.

Today, this fire is getting bigger, people from Anatolia to Europe and Latin America are increasing the cry for justice and spreading in waves. Today the crisis of the global capitalist economy is getting bigger, the resistance of the peoples is growing too, Under the pretext of the Covid epidemic and pandemic, the laws enacted to prevent the uprising of the people cannot protect the governments, the water has cracked the rock and we are the ones who will enlarge this breach. Our anger against capitalism is great and growing, our only salvation is to fight against capitalism, o

in this inhumane system is to destroy this system. From France to Guatemala, India, Mexico, America, Peru, Bolivia, Chile, peoples are revolting against capitalism, the end of capitalism is coming, and the victory of the peoples is imminent, our only salvation is the cry of rebellion. to develop and to build up uprisings.

It is the Peoples Who Will Destroy And Build the New, The Cry Of Rebellion Is All Over the W

orld Today, The People Who Resist Will RaiseThis Cry And Defeat Fascism 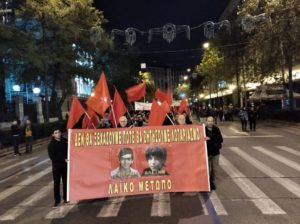 n away, their labour stolen, their future stripped of their lives, and condemned to hunger and poverty, do not forget and will not forget what they were made to experience.

Alexis Grigoropoulos and Berkin Elvan are the Face of Revolt of the Peoples.

Our War of Independence Against Imperialism Is Growing

The People Who Resist Will Win

Greetings to the Faces of Rebellion