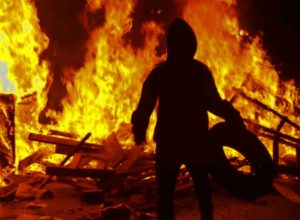 Open Fascism and Police Terror All Over the World

The 21st century is the age of crises for imperialists, a time of growing revolt for the peoples. They are doing the only thing the imperialists can do as their crisis deepens. They are increasing their terrorism, displaying fascism openly in the neo-colonial countries and European countries, which are the dynamics of imperialist exploitation wheels.  An open fascism attacks the people. Capitalism is rotting and as a result of the crisis it has opened while decaying, it finds the solution in ‘fascism’. They attack the people and try to intimidate them with their terrorist dictatorship.

Despite all these efforts of imperialists, a breach opens in the heart of capitalism and the only salvation of the peoples is to enlarge this breach, to destroy capitalism with the fires of revolt.

It uses repression and terrorist dictatorships towards peoples, with the so-called public security, which they call the police, and the hired killers, who are class and ideologically the leftovers of the rulers, who essentially have the task of protecting the power and the monopoly bourgeoisie. 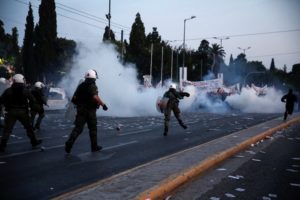 All kinds of facilities and opportunities are provided for the police. With these opportunities, they are assigned as the armed gangs of the state to commit violence and torture the people on the streets, universities, workplaces and roads.

Fascism is an enemy of the peoples and it fulfil its duty, it burns, destroys, and slaughter.

They saw trees, they burnt

They saw wings, they broke

Now they’re after the scent of humans

Wherever human, wherever light, they shot

All over the world, preventions have been taken with internal security laws on the pretext of the COVID-19 outbreak. When we look at the preventions taken, there is no single precaution for the health of the people. As a few examples, march bans, meeting bans, prohibitions of action, not getting together, closing people’s shops and markets

In addition, the workplaces and factories are constantly open and workers are forced to work like slaves, healthcare professionals work 24/7 in hospitals in unhealthy environments, there is overcrowded public transportation and there is no solution for this transportation issue.

On the other hand, the money allocated for armament, the privatization of foreign monopolies for the murder of nature, the imposition of curfews… We see that health preventions are a complete lie and the COVID-19 epidemic is also directly related with class. The bourgeoisie says “you will work like a slave or you will not have any chance to survive” to the peoples. And besides this, it is increasing its terrorist dictatorship over the people.

The internal security laws, precautions they have taken, the thousands of policemen they poured into the streets will not be able to stop the people’s riot. As capitalism decays, the resistance flowers of the peoples are growing in the middle of the world. 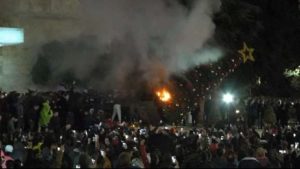 – In Latin America, in Chile, Guatemala, Bolivia, the people’s revolts against poverty, bribery, hunger, bad living conditions, and the coup organizations of imperialism,

– The operation against our comrades from Moovadef in Peru and the detention of 67 revolutionary socialists. The collaborator powers of imperialism in Latin America attack the revolutionaries and do not allow them to organize and go to the people. Despite all their attacks, they will not be able to block the revolutionaries’ struggle.

– The people’s taking to the streets against the internal security laws, which started with the Yellow Vests’ uprising in France, and the growing riot wave

– In Greece, on the pretext of COVID measures, protests are banned and 2000 police officers are given more than 30000 thousand Euros to go to universities, a raging police terror on the anniversary of the Polytechnic Resistance of November 17 and the murder of Alexis Grigoropoulos on December 6, the detention of those walking on the streets with torture, the detention of people from more than a hundred revolutionary, socialist and anarchist formations, piling them up in the police headquarters and keeping them under conditions without health measures, detention of those who want to leave flowers at the monument of Alexis, the attack of a state scared of flowers attacking the peoples with police gangs..

– 2918 people were killed in 11 months in Turkey. Fines of hundreds of thousands of lira were imposed. Hundreds of revolutionaries were arrested with conspiracy files. 37 people were killed due to torture in prisons. Hundreds of people who were unlawfully detained were tortured by the police. The people’s lawyer, Aytaç Ünsal, who had resisted on a death fast for 226 days and put his body on the line for justice, was arbitrarily detained before his treatment was completed, tortured under custody and jailed on the instructions of the Ministry of Interior.

The gangs of fascism continue to attack the people. Recently, the European Union commission convened and internal security decisions were made for the people. It was decided to take measures to prevent the spread of so-called terrorism.

The real terrorist, the real torturer, the real killer is fascism. Resisting the violence of fascism is the most legitimate defence of the peoples. All over the world, the peoples of the world puke at the face of fascism with their anger that gets sharpened as they wait.

“I will endure everything, I will endure it all. Because there is a pleasure in me that nothing can crush and destroy, and that is my resistance and strength.” In the novel “Mat ‘: Mother”, Maxim Gorky says that the only force that allows us to stand up to everything is our resistance.

Peoples’ pain and screams are common. All over the world, riots against the police and the state are growing and anger is increasing. We have only one weapon against fascism; it is to organize and increase resistance.

We put up with everything because we are the people. We have seen pain, torture and massacres. That is why our language is the same. It is the same words that come out of our mouths in every anger. 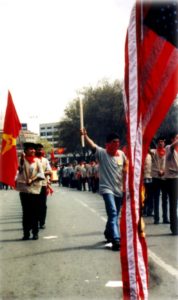 We are the people; We are laborers, workers, students, housewives, children, fathers, mothers. These tortures and police terror, which are increasing all over the world, cannot deter us. The peoples of the world have the only salvation and that is revolutionary internationalism. By growing internationalist revolutionary solidarity and struggle, we magnify the crises of capitalism and become their nightmare. Lenin says “Fascism is the rotten state of capitalism” and shows us a way. Growing the decay of capitalism and throwing it into the garbage of history, forming a union against fascism and organizing and fighting.

It is our call to all peoples and organizations of the world in the ranks of the Anti-Imperialist Front; We call on you to increase the anti-imperialist and anti-fascist struggle, to deepen the crisis of capitalism. Gulnihal Yilmaz, who was martyred in the resistance in the Great Death fast that lasted 7 years in Turkey, speaks to the peoples of the world:

The world we live in offers us only one way of salvation; to overthrow capitalism and to establish the power of the world proletariat in its place. Let its attacks grow even more, we are the ones to win. We will unite under a single front all over the world and bring the end of fascism and imperialism. The history of the world revolution, the leaders of the revolution, the revolts of the peoples show us our way.

“We’ll win! Because people miss happiness. They seek the warmth of a hand, the friendship, the taste of trusting in life.” It is human nature to be against exploitation, slaughter and fascism, and that is why we will win. The laws of nature and science also show us this.

Fascism attacks in an organized way. And we will organize and end fascism. We are the people, reborn from death. They can’t end us; our only salvation is in our unity. Let’s organize, unite, fight and win in the ranks of the Anti-Imperialist Front!

The People’s Violence Will Win Against the Violence Of Fascism

Down with Imperialism And Fascism, Long Live The Struggle Of The Peoples!

Our Only Gun Is Revolutionary Internationalist Struggle

Shoulder to Shoulder Against Fascism