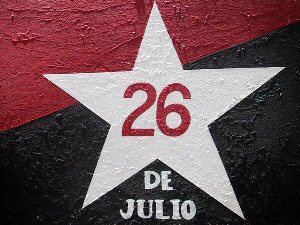 GRANMA EXPLAINS LIES ABOUT CUBA (Halk Okulu August 1, 2021 No. 90)
The newspaper “Granma” which publishes in Cuba, has issued an article dealing with lies.
The article shows how in the “recent developments” the imperialist-bourgeois media have conducted a major campaign of lies.
Like the campaign against a people’s government in Romania, like the campaign of lies continued to occupy Iraq…
The descendants of counter-revolutionary wealthy Cubans who live in the USA organise actions and give the impression these were organised in Cuba. When people rally against US incitement against socialist Cuba, they are presented as being “opponents of Castro”.
“Granma” publishes an “observers’ guide to fake news about Cuba”, giving some examples of mendacious news items:
LIE 1 –
The “#SOSCuba” campaign did not originate in Cuba. Member of the Polıtıcal Bureau and Foreign Relations Minister Bruno Rodriguez Parrilla stated that USA intervention has started through a social media campaign using news sources aimed at destabilising the people of Cuba and proliferating anti-Cuba content. The first Tweets in the social media campaign were launched from the USA and Spain.
The campaign was started with the “#SOSCuba” hashtag “was disarticulated when it was crushed by an international clamour, by the predominance in networks of the world will to proclaim the lifting of the blockade” (of Cuba).

LIE 2 –
A picture taken in Venezuela was presented as being taken in Cuba. The claim was made that a 13-year-old had been killed and the picture was widely disseminated on social media but it was taken in Venezuela. The youth’s name was Alberth Lopez and he was killed in Venezuela by a stray bullet fired in a clash by the “Koki gang”.

LIE 3 –
The statement denied that a particular Twitter account was the truth, saying “the media must depend on the truth and not contain incorrect information”. The institution that disseminated it, ABC, has never had an office in Cuba, nor a representative based there.

LIE 4 –
News about a “minister resigning” was false – there was no such minister nor did he resign.
Again, CNN from the USA shared a supposedly counter-revolutionary “protest photo” but it contained Rene Capote, a worker in the Economic and Planning Minister, together with his friends, at a rally to defend the Cuban Revolution and they reacted against the CNN report.

LIE 6 –
A video was circulated allegedly showing a Cuban being killed on the street for not wearing a mask. The video was actually from the Dominican Republic. One comment was “It is 37 degrees. What Cuban would be wearing a jacket in those temperatures?”

LIE 7 – Neither images of Raul Castro fleeing Cuba, nor the protesters praying in front of police forces, nor the images of looting of businesses with signs in English were taken on the island of Cuba. All this was denounced by La Red Verdad, a team dedicated to disprove fake news on the net.
The photo of Raul “fleeing” came from a 2015 visit to Costa Rica.

LIE 8 – La Red Verdad mentioned a photo presented as being an anti-government demonstration in Havana. None of the buildings or the flags had any connection with Cuba. The comment was made that “they don’t care enough to deal with it anymore”. It was in fact taken in 2018 on the national day of Catalonia but it served as an anti-government demo in Cuba in 2021.

LIE 9 – – The seizure of Camagüey by rioters was a colossal lie. On Twitter, the Government of that province posted: “The three units of the PNR in #Camagüey with their fighters defend the Cuban Revolution…Photos from a few minutes ago…don’t believe the fake news”.

LIE 10 – La Nación, from Argentina, published images of a crowd of “opponents” of the government in Havana that in reality are those who support the President, indicated Red Verdad.

LIE 11 – A photo taken in South Africa was presented as an “actions in Cuba”.

LIE 12 – Manipulated image of street riots, supposedly in Havana, have been shared on social networks more than 2,500 times and show several people running and the street floor dirty with garbage, Cubasi denounced. AFP showed that the throwing of “bottles, stones and all kinds of objects”, visible in that image, occurred in Leicester Square in London on July 11, before the Euro 2020 final.

LIE 13 – A picture taken in Nicaragua in 2018 was presented as being an “anti-government action in Cuba”.

LIE 14 – ‘A woman from Cuba reacted after taking to the streets to defend UN human rights and the revolution in Cuba but was then desscribed as an ‘anti-government activist’. Betty Pairol had tweeted against criminals and vandals in Cuba, using a picture and was angry that this was used in a manipulative fashion.
“We continue to struggle, long live the revolution. # NoMasBloqueoACuba (No More Blockade Of Cuba).” She said but
shortly after the account was censored by Twitter.

LIE 15 – CNN published a picture but it was not taken in Cuba, but in Miami’s “Southwest 8th Street”. Shops signs are clearly from Miami in America, not Cuba.