Anti-Imperialist Front participated in an online event dedicated to the analysis and history of the current crisis in Ukraine. The conversation was held with Borotba from Donetsk People’s Republic.

Comrades from the Alliance Against War and other anti-fascist anti-imperialist groups from Austria, Switzerland, Germany, Spain and Belarus, a total of 17 people were participating to the online meeting, initiated by Anti-Imperialist Front.

Solidarity and strengthening the anti-imperialist movement was discussed, and how to oppose the imperialist wars and propaganda.

A statement with more details on the events and developments is expected to be released by Borotba in the coming days. In the meanwhile, we are reproducing the summary of the conversation.

Our interlocutor from Ukraine is in the organization “Struggle” (Боротьба – Borotba), since 2011.

He was a member of the Communist Party, but due to internal contradiction he and many others with him, left.

In March 2014, he was the representative of the Odessa City Council for the Odessa region attempted to obtain autonomy according to the new Ukrainian laws, this was unsuccessful.

A difference between the regions of Ukraine is also reflected in the fact that the Russian-speaking population in the East, North and South, have contradictions with Ukrainian-speakers living in the West. For Russian-speaking population the 9th of May is a national holiday (victory in the Great Patriotic War over Nazi Germany). But in the West of the country, it is supposedly celebrated as a “day of mourning.”

Until 2014, contradictions within Ukraine concerning the different population groups were subjected to democratic mechanisms, this ended after the events on the Maidan.

90% of the population in Odessa is Russian, and:

As a result, there were peaceful demonstrations and protests, which were drowned in a blood on 2nd of May and burned in Trade Union building. Our interlocutor is a survivor of those events, but some of his colleagues and friends lost their lives.

This was the reason, that volunteer fighters from some Soviet successor states (Kazakhstan, Caucasus states, Baltic states) came to the Donbass to fight.

The Minsk Agreement was supposed to provide special status in Ukrainian Constitution and autonomy to the Donbass region (Donetsk and Lugansk), but negotiations on this have not taken place to date.

The only result is that the Ukrainian military has not advanced further east since then, for 7 years.

The negotiations on the autonomy status are prevented by the right-wing. If the president starts to implement the Minsk Agreement, he will have to fear a new Maidan against him, so the government is afraid of losing power.

There is a great political, economic and infrastructural crisis in Ukraine.

The population is angry, but also afraid of the extreme right-wing groups and secret services.

President Zelenskiy desperately needs a success, and wants to achieve it in the Donbass, thus solving his political problems. For that, he hopes for Western help.

Just as 7 years ago Russia helped only half-heartedly through threats of sanctions, he believes he is now in the same situation.

What has changed is that more than 700,000 habitants of Donbass now have Russian citizenship.

Ukraine is at the ceasefire line with 120,000 soldiers.

Ukraine believes it has an easy game, but this would be a big mistake.

30 years ago Russia made many agreements with the West and made many concessions.

NATO responded to this in 7 waves of NATO eastward expansion.

But there is a red line now, Ukraine must not become a NATO state.

If there is a military confrontation, that would lead to NATO involvement and a world war.

Little is reported about Georgia, but there was a similar situation:

M. Saakashvili had attacked them and Russia immediately reinforced its peacekeeping forces at that time as a military response.

The situation in Ukraine is that the West is getting closer and closer, supplying weapons, developing infrastructure, preparing 10 military bases for NATO, which are officially Ukrainian, but NATO use them already.

There is a naval base in Ochakov, which is used by NATO.

In addition, this list includes Snake Island, where the Americans installed surveillance systems for underwater and surface conditions, as well as Mariupol, where US military experts train Ukrainian snipers.

In talks NATO promises Russia a stop of the actions, but continues.

The reason for this is the world economic crisis, and economic competition. Our interlocutor calls it “economic cannibalism”, when some economic communities (economic subjects) eat their own kind.

There is an economic competition between the USA and the EU against the post-Soviet economic system, for markets. Damage to Russia (and other countries) is always good for the economy of the USA, but not good for the ordinary people of the EU and the USA.

The way out can be economical transformation – rejection of the liberal system, the implementation of nationalization and the introduction of nationwide economic planning.

The real opponents would not be the peoples of these countries, but their governments and imperialist elites.

It would be important to have contacts, exchange of information, events in this regard.

The inhabitants of the Odessa region do not like the new state, they are afraid of the neo-Nazi terror groups and secret services.

Many of them will fight (in case of war) against the state, against Kiev and not against Donbass.

(If the new phase of civil war will begin, on one side there will be Ukrainian state, on another one – Donbass state + people from Odessa, Kharkov, Zaporozhie, Nikolaev, Kiev, Kherson, Dnepropetrovsk and another cities)

He repeats the high troop concentration of 120,000 soldiers at the ceasefire line, the high number of military equipment from NATO, Turkish drones.

Question about daily life in the Donbass republics.

It is better now than 5 years ago, houses have been repaired, Russia has donated mainly roofs and window panes, invested in infrastructure, reopened mines, restarted factories, people are working, earning, pensions are little bit higher than in the west of Ukraine, they have cheaper public services such as transportation, cheaper gas and gasoline and inflation is lower than in the rest of Ukraine.

With the help of Russia, Donbass could certify its export goods and thus export them.

Step by step, problems are being solved.

Question about the communist party.

Previously, different opinions could be presented and discussed in a democratic sense.

Since 2011 there is a board, which determines which opinion is correct and excludes disagreeable ones.

Functions can be filled only with the consent of the board.

Three days before, Yanukovych had concluded an agreement with EU states such as Germany and Poland that the police should leave the center of Kiev and the putschists, the neo-Nazis, should lay down their arms. When police did that, and leaved center, neonazi groups occupied the parliament and government.

And with only the help of the communists Yanukovych could be deposed in a vote.

The EU remained silent about this breach of treaty.

Dubious role of the communists.

Communists did not participate in the anti-Maidan movement.

The members of the Communists did not fight against the Maidan.

There is no written summary of the organization yet, because the situation now changes quickly, waiting for answers, once from Russia, once from the USA….

QUESTION about Russian the engagement in Syria, Mali, do imperialists want to paralyze Russia?

The neoliberal crisis, and the bursting of the economic bubble endangers the center of the economy, Washington, these want to solve the problems by wiping out competitors.

Russian state, he said, has the same interest as the peoples of the countries where it is present. However, Russia cannot be thought of as a monolith.

Russia has different centers of power, which have different interests.

The government in Kiev is cynical, has economic interests, represents a divergent oligarchy, and is close to the Neo Nazis. The latter have a great influence on Zelenskyiy.

Zelenskyiy won the election on promises of peace and had more than 70% of the population behind him. That support has dropped to 17% because he is weak and is now inciting a war out of fear of the Neo Nazis, fear of a new Maidan, a coup against him if he makes peace with the Donbass region under the Minsk treaty.

The balance between the various oligarch – groups, even as part of the oligarchy, also fails him.

About role of Israel.

Ukraine behaves aggressively, they wanted to kidnap a Donbass field commander from Russia, carry out massacres in Russia, they tried to establish and moderate Neo Nazi terrorist-groups in Russia.

MKU (Maniaks: Killing Cult (or Cult of Killings)) is one such organization whose members operate in Russia. 106 members were arrested in Russia 2 months ago, 14 members in Saratov in May 2021, 16 members of MKU in different cities of Russia in April 2021.

There is an underground war going on against Russia.

Comment: the imperialist media talks only about Russian aggression..

Russia is concerned about implementing the doctrine to liberate Crimea militarily. Russia feels they can’t make a deal with Zelenskyiy (because he is influenced and all the time changes his position, lies) and is only negotiating with the US. The best result for Russia would be peace with Ukraine.

Question: is there a limited war at all?

There are 15 nuclear reactors in Ukraine, 4 of them are nuclear power plants.

Russia will not wait until Ukraine becomes a NATO state, will there be a military or political solution? The situation will not remain as it is at the moment.

In 2015 Russia did not conquer Kharkov and Mariupol

Ad 1) Russia was only observer in 2014, wanted to support only the strongest political force, Yanukovych, bet everything on him, Russia did not support pro-Russian organizations. Therefore, it provided a bad starting position.

Ad 2) Not liberating Kharkov and Mariupol was a mistake, at that time there were 2 determining factions in Russia, the liberal group and the patriotic group, the security Forces (military, intelligence, police). In 2014, the liberals were still in charge, now the security bloc is stronger, the illusions of 8 years ago have been abandoned.

Economically, Russia was afraid of losing the gas business, that Ukraine would turn off the gas tap. Now there is Northstream 2 and the Turkish Stream, there was also a large ammonia pipeline to Odessa for export via ships, this has been replaced by the new ammonia pipeline to Taman on the Sea of Azov. Other infrastructure projects have made Russia independent of Ukraine, so the old fears of too much economic loss have receded. 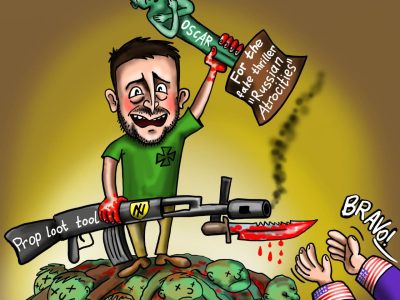 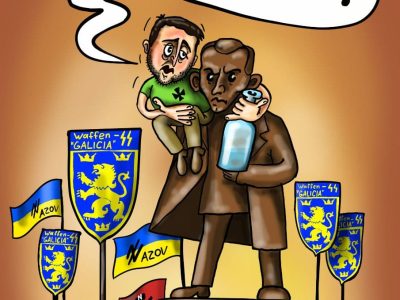 We share with you the audio recording of Şadi Naci Özpolat, one of the Marxist ...
By AIF Greece
March 1, 2022
Analysis

Fascism is a crime, not an opinion. Fascism is inhuman. Fascism is an evil that ...
By Anti-Emperyalist Cephe
February 24, 2020
0 %
Social connect:
or