Imperialism wants to deploy NATO bases all over the world and install reactionary, fascist governments which will serve its interests.

End the military provocations of NATO, the US, and the EU! Solidarity with the anti-imperialist and anti-fascist forces in eastern Ukraine!

Recent events around Russia and the Donbas are developing extremely fast. On 24 February, the world woke up with the news “Russia attacked Ukraine”.

To evaluate the events and their development in their entirety and fully, more time is needed during which they can be observed and analyzed on the go. But there are some things that we can say from today.

Until yesterday, we were still discussing Russia’s recognition of the Donbas republics as independent states.

The imperialist media hysterically claimed that international law had been “violated”. While we were considering how to clarify these claims, the military operation launched by Russia took its place on the agenda.

The Ukrainian state has been waging open war against Donbas for 8 years. In this war, waged by the Ukrainian army and fascist paramilitary organizations supported by NATO and the EU, against the people of eastern Ukraine, 13 000 people have been killed to date, according to official figures.

In the last week before the start of the military operation, Ukraine had subjected the Donbas region to continuous shelling. Bombs have been raining down on the people of the two republics.

If we put aside Russia’s interests as a state in this region and focus on the events that have developed in recent years, we can see very clearly how this war came about.

The US and the EU, through their support for the fascist coup in 2014, tried to take Ukraine completely under their control. The imperialists, who forced Ukraine to become a member of NATO, have extended their political and military siege against Russia and prepared the ground for the outbreak of the war.

While the imperialist media accuse Russia of “violating the international law”, they don’t say a word about Ukraine killing the people of Donbas.

In 2014, to put an end to the war in Donbas, the Minsk Agreement was signed between Ukraine and the representatives of the DPR and LPR, with the participation of 3 other countries as guarantors of the agreement. With the signing of this agreement, it became part of international law with the UN as guarantor.

Alongside this, no one, apart from Russia, has complied with the agreements set out in the Minsk agreements. But, what does the Minsk 13-point agreement include?

First of all, the withdrawal of heavy weapons from the region. To be fair, both parties to the agreement have not implemented this.

Next, the resolving of the conflict through dialogue, with representatives of the DPR and the LPR being recognized as equal parties in the negotiations.

During all these 8 years, Ukraine has not once done this. It never started negotiations with the DPR and the LPR.

According to the Minsk agreement, by March 2015, the autonomy of the Donbas was to be guaranteed through changes to the constitution of Ukraine.

By the end of 2015, local elections were to be held in the two republics, under the supervision of the OSCE.

So that the anti-fascists would not fear being brought to criminal responsibility by the Ukrainian authorities, a general amnesty had to be declared in the country.

As can be seen from the above, Russia did not intend to annex and separate Donbas from Ukraine.

If Ukraine had adhered to the Minsk Agreement is signed, there could have been peace in the Donbas since 2015.

But Ukraine never did this. In October 2021, Germany and France, who are guarantors of the agreement, declared that “Ukraine no longer needs to meet with representatives of Donbas,” and thus effectively “buried” the agreement.

But despite this, Russia was always blamed.

Who broke the Minsk agreement?

Who violated the international law?

First of all, it is useful to note the following: in none of the 13 points of the Minsk agreement is it written that “Russia cannot recognize the republics in the Donbas as independent states”. And Russia is a guarantor of the agreement, not a party to it, as are the DPR, LPR, and Ukraine.

Has Russia “buried” the Minsk agreement after recognizing the independence of the two republics in the Donbas?

Did it violate international law?

To some extent yes, by recognizing the DPR and LPR, the Minsk agreement effectively ‘died’. Because they can no longer be brought back into Ukraine. But Russia became the “last country” to break it.

And this after 8 years of effort.

International law has two basic principles. These two principles are in contradiction with each other.

The first principle is the territorial integrity of each country.

The second principle is – The right of self-determination of the nations.

Why did the Donbas demand its independence? Because there is a fascist and neo-Nazi regime in power in Kyiv that came to power through a coup supported by the imperialists. And the people of Donbas carried out an anti-fascist breakway.

This breakaway in the English language is named by the term secession. In this sense, the secession of the Donbas is within the framework of international law.

Furthermore, the decision of the UN International Court of Justice regarding the status of Kosovo is on the table. Thus, the secession of the Donbas is fully within the principles of international law.

At that time, the imperialists did not consider the separation of Kosovo from Yugoslavia to be a violation of international law because it was in line with their interests.

On October 8, 2008, this case was taken to the United Nations International Court of Justice in The Hague, Netherlands. On June 22, 2010, the UN ICJ issued a ruling that “Kosovo’s declaration of independence was not in conflict with the international law.” What applies to Kosovo applies to all other corners of the earth, including Donbas.

The dispute on this subject ends here.

We, as the Anti-Imperialist Front, always oppose imperialism and always take the side of the people. We are guided by these principles.

In determining our position regarding the military operation undertaken by Russia against Ukraine, we are guided by this principle.

The real victim of all that is happening is the people of Ukraine. And that is something that we do not want to happen.

But the responsibility for this, like all other governments serving imperialism, lies with the Ukrainian government. It is currently leading its people to disaster.

Russia has repeatedly said that it is against Ukraine to become a member of NATO. It has also repeatedly stated that it perceives as a threat NATO and especially the US imperialists, and in some form, the EU imperialists to reach its borders.

If imperialism withdraws the people will have no problems

Voice message from Alexey Albu who member of Borotba – From Donbass. 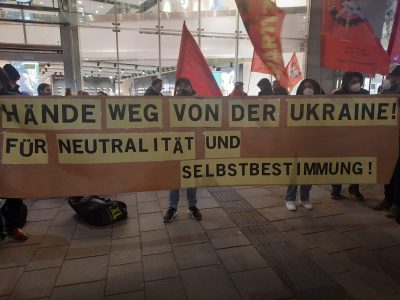 The imperialist aggression of the NATO states and the solidarity action with the people of Donbass in Vienna. 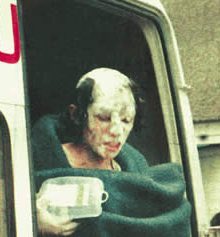 Birsen Kars is Immortal! Her killer is Turkish Fascism, US-EU Imperialism! ‘’we can die fort ...
By AIF Greece
February 6, 2022
0 %
Social connect:
or