On the day of brutal murder of at least 46 antifascists, trade unionists in Odessa by a huge mob of fascist and ultranational gangs, a successful protest and moving commemoration was held in Vienna.

While the names of the victims in and outside the trade union building were counted one by one, the antifascist anthem, the Greek song of Mauthausen was played. Katyusha in Russian was played also when carnations were layed down in front of the monument of Soviet soldiers.

The speech of Borotba member Alexey Albu, who is a survivor of this massacre, was listened with big attention and a serious attitude.

Different antifascist and antiimperialist groups were joining this meeting at the Soviet monument, which Ukrainian nationalists seek to misuse especially in these days when the liberation from Nazi Germany is celebrated.

Ahead of KOMintern, Antifascist Action, the Person Committee for Peace in Donbass and Antiimperialist Coordination, a speech was held also by AIF, telling about imperialist media lies, turning right to wrong and don’t give the chance for objective sight in the events.

Also the xenophobic attitude and attacks towards Russian people, making them guilty for the conflict was condemned. It was stressed also that no peace can be possible with the fascists. No peace can come while continuing sending heavily arms to the right extremist Ukrainian state, but only with the withdrawal of all nato forces from the region.

In between the messages people shouted the slogan “Long live international Solidarity”.

Honor to the martyrs of Odessa, Down with fascism! 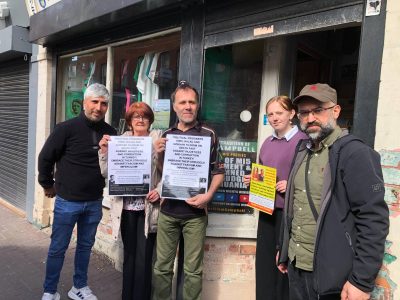