CALL TO TAKE PART TO OBSERVE THE TRIAL AGAINST PROGRESSIVE, LEFTIST LAWYERS 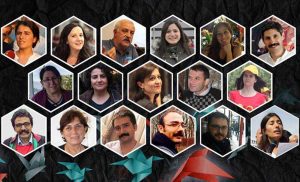 Between 03rd-07th December the next trial against the lawyers will take place.

In this text you can find detailed information about the process.

Progressive Jurists Association’s (ÇHD) 17 imprisoned lawyers were released on the trial hearing session held on September 14th 2018. Upon the objection of the State Persecutor, on September 15th 2018, the committee constituted by the same judges lifted the release decision for 12 of the lawyers. This time, a decision to “arrest for imprisonment” which is not written in the Criminal Court Law, was taken.

As for the ÇHD’s general president, lawyer Selçuk Kozağaçlı, on September 16th 2018 he went to the Court on his own, got arrested and on September 17th 2018 imprisoned by the committee formed by the Court’s judges  Akın Gürlek, Serkan Baş and Erol Güngör.

During the “trial” of  Kozağaçlı, the police removed the lawyers by force from the courtroom, and being left without lawyers, in the technical sense fundamentally without a hearing, it was resorted to the illegal “arrest for imprisonment” decision directly. Among those who formed the committee for this decision,  Akın Gürlek’s permanent jurisdiction over the presidency of the 37th Heavy Penal Court was published on September 19th 2018. Because of this, it is not known if Kadir Alpar who on September 17th 2018 acts as a proxy for the presidency of the 37th Heavy Penal Court was on duty or not, neither how Akın Gürlek came to preside the court.

From the process we tried to summarise below, it is clear that 37th Heavy Penal Court’s judges Kadir Alpar, Serkan Baş and Erol Güngör formed a heavy political repression.

Likewise, the downgrade of Kadir Alpar who acted as a Court presidency proxy and of the member judge Serkan Baş to perform other court duties via the Judge and Prosecutor Committee’s decision related to the permanent jurisdiction published on the September 19th 2018., is a clear proof of our claim. After this whole process contrary to the law rights, it is impossible to say that the judges who were previously on duty for the imprisonment hearing of Kozağaclı, Akın Gürlek and Ferhat Gülbağça who joined later on, were independent, impartial and appointed in a way appropriate to the natural law judge principle.

In a way that corroborates our claim, the committee of Istanbul’s 37th Heavy Penal Court composed of president Akın Gürlek, member judges Ferhat Gülbağça and Erol Güngör, while performing the hearing in the absence of witnesses and defenders, changed the previously established time and place for hearing. It is not possible to reconcile this situation with law rights, independence of the law judges and impartiality.

Claims in the file 2018/84E.N. and details related to the process unlawful from the beginning to the end

[2]     After being unjustifiably removed from their jobs via state of emergency (OHAL) government decrees (KHK), academician Nuriye GÜLMEN and teacher Semih ÖZAKÇA carried out an action for 120 days in front of the Human Rights Monument in the Ankara province, and started a hunger strike with the demand to be reinstated to their work, on March 9th 2017. While carrying out their protest, Gülmen and Özakça were imprisoned on May 23rd 2017 under the claim of membership in an illegal organisation, and taken to the court on September 14th 2017.

[4]     With the decision number 17 of the court’s session dated September 14th 2018 it was unanimously decided that, in accordance to the Criminal Law (CMK) paragraph 109/3-(b), the suspects will orderly give signature every Monday between 8:00 and 0:00 o’clock at the police unit nearest to their address. With the decision number 18 it was decided that, in accordance with the CMK paragraph 109/3-(a) suspects are prohibited to leave the country.