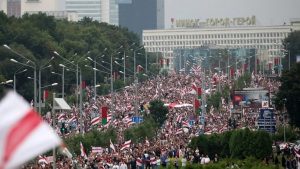 World imperialism is at the limit of its existence, and in order to prolong its already obvious agony, it needs a new sacrifice, thanks to which it could seize another sales market, destroy more competitors and provide itself with cheaper energy resources.
This time, the target of the imperialist aggression has become the Republic of Belarus, the former republic of the USSR, located between imperialist predators. After the destruction of the Soviet Union, Belarus has been seeking to pursue a policy independent of the imperialist powers, as far as possible for a small bourgeois state without energy reserves, which is in strong economic dependence on foreign capital, sales markets and raw materials.
In Belarus, the scenario of the “color revolution”, which has been repeatedly worked out in other countries, is being played out, as a result of which the current leadership of the country should be overthrown, and instead of it, an administration controlled by international institutions should be installed as a conductor of neoliberal reforms.
Belarus is valuable for the Western imperialist powers because some of the largest gas and oil pipelines that provide Europe with Russian gas and oil pass through it, as well as the presence of strong competitors in the production of potash fertilizers, mining dump trucks, agricultural machinery and others.
The imperialist forces had been preparing for a “color revolution” in Belarus for many years, and now the idea of overthrowing the current leadership of the country has found fertile ground among the Belarusian people. Liberal propaganda that has captured the minds of young people, as well as parts of middle-aged and even older people, pushes people to a mass protest against the results of the presidential elections on August 9, 2020, in which the first and permanent President of the Republic of Belarus A. Lukashenko was declared the winner. Protesting out of a just sense of outrage at the violations during the election campaign, as well as the steady deterioration of life, the people of Belarus are in fact acting according to the plan of the imperialist forces to carry out a coup d’etat in the country.
We declare a resolute protest against the attempt of European-American imperialism to make Belarus its next neo-colony, destroying the national economy and enslaving the Belarusian people!
We consider the interference of the Western countries and any other states in the internal affairs of sovereign Belarus inadmissible, taking advantage of the discontent of the Belarusian people with the capitalist order in their country.
We call on the Belarusian communists and all the progressive forces of Belarus to fight back firmly the imperialist aggression and the attempt to carry out a coup d’etat in your country!
Hands off Belarus!

Belgian lawyers are in front of the Turkish Embassy today, and are on a solidarity hunger strike