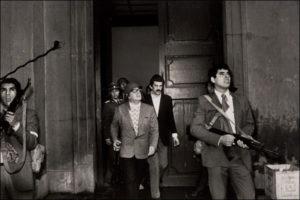 Commemoration Event for Salvador Allende Murdered by the Fascist Junta in Vienna Chilenian, Venezuela, Austrians and people from other countries participated in the commemoration of Salvador Allende, and those who were killed by the fascist junta on September 11, 1973 in Chile. The commemoration took place in Vienna’s Danube Parc near the Salvador Allende monument. The memorial ended with speeches emphasizing the necessity of fighting fascism and maintaining high solidarity, as well as the revolutionary songs of Chile.

Political Revenge by the police?