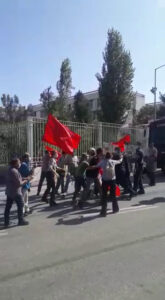 This week, the police attacked our demonstration in front of the Ministry of Justice which we hold every week to demand freedom for 11 revolutionaries from Turkey imprisoned in Greece.
The Greek police brought riot police and detention vehicles in front of the ministry today to prevent the action we wanted to do in front of the Ministry of Justice, which we have done without any problems until today.
We were not allowed to go in front of the ministry for the protest, on the grounds that we “closed the road to traffic” before the protest started. They wanted us to protest in front of the police bus, not in front of the ministry.
We will not give in to this arbitrariness, it is they who block the road,
We wanted to carry out action by saying that we will always make our statement where we do it. On the other hand, the police, who obviously received their instructions from “on high”, with the barricades they set up with their shields against this this just and legitimate action exposing the unlawfulness done to 11 Revolutionaries from Turkey,
tried to prevent us from raising our demand for justice to those responsible for injustice. For this, they attacked us with shields, kicks, punches and pepper spray. Despite this attack, we did not give up, we resisted by continuing to be determined, we won our right to take action by closing the road to traffic and holding a sit-down protest
The police of the collaborationist fascist Mitsotakis government had to step back in the face of our resistance. We voluntarily ended the action by performing our action at the place we do it every week, showing up their  attack and reading out our statement.
Long live resistance, long live victory
We will win by resisting
Release the Revolutionary Prisoners
We are the people, we are right, we will win
People’s Front in Greece