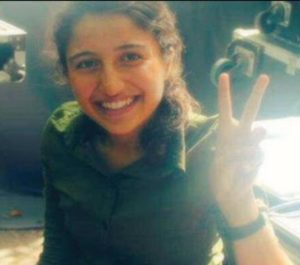 Fascism in Turkey claimed another life this morning…

Before a day had dawned, our dawn was drowned in blood…

Sila Abalay, an 18-year-old member of Dev-Genc (Revolutionary Youth), was murdered by the police in the early hours of the morning in the flat in which she stayed. An 18-year-old member of Dev-Genc who had chosen revolutionism in order to demand a reckoning for Berkin Elvan. At the age of 16 she had been imprisoned, and with her hunger strike in prison she brought the oligarchy to its knees.

She had started the revolutionary struggle at the age of 16, and also did not surrender to her last breath. The murderous AKP police killed her in the house she was staying but did not get her to surrender! To cover up their execution, the murderers lied about Sila clashing with the police and sealed up the house, without even informing lawyers! Now they are not even letting lawyers into the street where Sila was killed.

They produce these lies about an 18-year-old Dev-Genc member they could not get to surrender… Sila brought Berkin to life and took over his flag of resistance… Her young life was filled with the desire to demand a reckoning for the children they kill every day. Her cheerful smile was filled with love for the people and the homeland…

We will demand a reckoning from fascism for drowning our mornings in blood, and her smile and heart are added to our revolutionary martyrs… Let the world know that the reckoning will not be delayed until the crack of doom… Our 18-year-old girls and our seven-year-old children killed in our sleep will not be left where they fell. Sila will remain as a hero of Dev-Genc and we remember like the people those like Deniz Gezmis who at the gallows uttered their last words 45 years ago, those who executed them are no longer remembered.

FASCISM WITH ITS MASSACRES CANNOT GET 80 MILLION PEOPLE TO SURRENDER!

HAVE YOU HEARD, A FATHER IN DERSIM HAS BEEN ON HUNGER STRIKE FOR 70 DAYS!

Stop Imperialist Expansion and Provocation! No to the Rearmament of Fascist Ukraine Against Donbass! US-NATO ...
By Revolutionary Youth London
February 14, 2022
Next Article:
May 6, 2017
min read
Social connect:
or