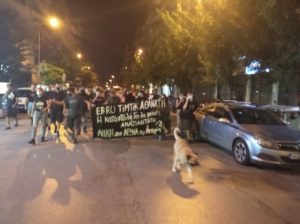 Police attacked the protest which was held for People’s Lawyer Ebru Timtik who was martyred on the 238th day of the death fast resistance in front of the consulate in Thessaloniki, arrested and tortured two People’s Frontmen. In the evening of the same day, 150 people marched to the Turkish consulate in Thessaloniki. The struggle against fascism is the common struggle of the Peoples. Solidarity is the weapon of the People.

Arrested People’s Frontmen To Be Released
Down With Fascism, Long Live Our Struggle

In Athens, Greece on 28-08-2020 A press release was made in front of the Turkish Embassy