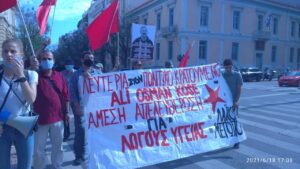 People of the People’s Front of Greece and the Committee for Freedom for Ali Osman Köse, who has cancer in front of the Turkish Embassy in Athens and has a cystic area with a diameter of 9 cm in his kidney,
They carried out actions for Revolutionary Prisoner Ali Osman Köse, who was not treated for months and was finally smuggled into prison after being operated upon by his comrades, and Deniz Poyraz, who was murdered by a fascist killer on June 17 at the HDP İzmir party building.
During the action, a banner reading “Let Ali Osman Köse be Released and the Right to Treatment Provided” was unfurled. “Deniz Poyraz Is Immortal, Ali Osman Köse Should Be Released, Making Revolution Is Not A Crime, It Is A Duty The Real Terrorists Are Imperialists, Kurdistan Will Become A Graveyard To Fascism, We Will Win By Resistance, Shoulder To Shoulder Against Fascism,
The slogans of “Kurdistan Goristan Jibo Fasistan” were chanted.