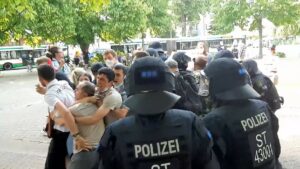 GRUP YORUM: GERMAN IMPERIALISM CANNOT PREVENT OUR ART
The German police attacked the “solidarity rally with political prisoners” held in
Magdeburg on Friday, June 18, due to the participation of our group, Grup
Yorum.
Magdeburg police, who came to the event, which started at 3.00 p.m. with
dozens of police cars and a unit, announced that they were banning our
concert without any document and court decision, and said that if we took our
instruments and started to give a concert, they would intervene.
We declared that we do not recognize this arbitrary decision and that we will
sing our songs here today no matter what, and we started our program
together with our friends who organized the event.
After the statements were read by the Magdeburg Network for Political
Prisoners and Rev-Youth Europe members, we got ready to take the stage, and
meanwhile, also the police units prepared for the intervention.
For the last time, we announced that we started our concert by making our
statement and invited everyone to the folk dance.
The people of Magdeburg, the friends of the youth and our friends from the
Solidarity Network for Politicial Prisoners who came to the concert encircled us
and clinged to one another. A few minutes later, when the German police
attacked, everyone got together and at the same time we continued to sing
our songs.
The police tried to detain us and our friends by use of violence, but had to step
back in the face of our resistance. The German police, who could not disperse
the ring that we created by sticking together, withdrew after a while.
During the attack, many of our friends were injured, our drums were
confiscated due to “constitutes a crime”, our electricity was cut off to prevent
our voices from going from the microphone while we were singing, the
microphone was stolen from the hand of a friend of ours while we were
speaking, about 100 policemen attacked us and our audience, and attempted
detention.
The whole area, the street of the square, the side streets and the street of the
place where we stayed were equipped with police cars and their units, and the
units did not leave the area until 9.00 p.m. in the evening.
Today, we could once again defeat the attacks of German imperialism and
exposed the lies of democracy. We have repelled all the arbitrary attacks
imposed on us with our resistance, and together with our listeners and
comrades, we have shown that they cannot silence us wherever we are, that
we will never allow this, that we will only respond to their attacks with
resistance.
Repression Won’t Intimidate Us!
Grup Yorum is the People and can’t be silenced!
Songs can’t be silenced, the folk dances continue!

INTERNATIONAL SOLIDARITY IS THE WEAPON OF THE PEOPLE