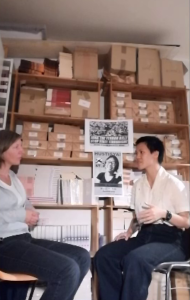 Anti-Imperialist Front TV has conducted an interview with Marion of the Philippines organisation Anak Bayan. Marion said her organisations has chapters in Austria, the USA, Canada and of course the Philippines. She described it as having a youth organisation with a Marxist-Leninist-Maoist line. The state calls them “terrorist” but they serve the people. The situation has been worsening under Duterte in the Philippines. About 29,000 people have been killed in the “drugs war” and about 260 farmers killed in land disputes.

AIF TV noted that there has been a lot of intimidation internationally. Marion said Duterte had promised peace talks with the Communist Party of the Philippines (CPP) but reneged on this and his anti-American rhetoric was later changed -for example he has pardoned Joseph Scott Pemberton, a US Marine who had killed a Philippines transgender woman. Public utilities can now be owned by foreigners and foreign companies. With his war on drugs Duterte has sought to create “bad guys” to fight, and tensions in the Philippines have risen. More people join the opposition, including the CPP, but in response the government is more repressive. Offices are raided and presses destroyed.

AIF TV noted that the lawyer Aytac Unsal, one of the recent Death Fast resisters in Turkey, had expressed solidarity with the comrades in the Philippines. Marion said that as migrants we all have a common enemy – imperialism. They try to divide us but it is our job to further solidarity. Even in Austria, the scene of the interview, you cannot be silent as even here anti-terrorist laws can be used. Marion said she was still a Philippines citizen and could be deported there.

AIF TV said the level of repression internationally had grown. Marion agreed, saying the virus gives excuses. Even protesters who observe social distancing have been arrested. On a recent occasion they were arrested and the police did not bother to tell them why. Male police would look in on women detainees and behave in a sexually threatening manner. At the same time there was official neglect of the corona issue yet protests could be banned using corona as an excuse.

Marion concluded by thanking AIF TV for the interview and emphasized her organisation was against imperialism, fascism and feudalism.

STATEMENT ON ARRESTS IN ATHENS September 25, 2020