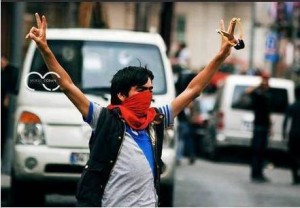 On the morning of June 16, 2013, Berkin, aged 14, went out into the streets during the Gezi uprising where he was born, grew up, played and struggled against fascism, and was hit on the head by a gas canister fired by the police. Berkin had gone out in the early morning hours to buy bread …The entire area and the streets and squares of Turkey were hemmed in by the AKP’s murderous police. Six people before Berkin had lost their lives in the Taksim Gezi resistance. Ali Ismail Korkmaz, Ethem Sarisuluk, Mehmet Ayvalitas, Medeni Yildirim, Abdullah Comert and Ahmet Atakan had been murdered by the AKP fascist police.

On the soil where Berkin grew up, for the past 45 years obtaining bread has always come at a price.

Because the people’s bread was justice …

The peoples of Anatolia have for years been left hungry and without justice in the face of poverty, corruption and tyranny and have struggled for “people’s bread”, that is, justice.

Yes, Berkin went out for bread that morning;

He was going out for the people’s bread to confront tyranny in the district where he was born and grew up.

Fascists have always thirsted for blood and bloodily repress all those who thirst for justice.

They have gone mad and wildly attacked 14-year-old children, old people, men and women, millions of people who have had enough of AKP fascism.

And the police deliberately took aim and fired a gas canister that exploded and struck Berkin on the head, causing him to fall to the ground.

Berkin resisted for three seasons. He was in a coma for 265 days. Berkin Elvan’s health situation deteriorated on March 6 and he twice had epileptic fits. On March 7, his heart stopped for 15 minutes and cardiac function was only restored with the help of a machine. On March 9 he had lung problems and gradually his brain function began to fail. Damage to his internal organs spread. He weighed 45 kilos on the day the murderer police injured his head, but his weight had fallen to 16 kilos by the morning of March 11, when he was martyred. He was killed by the AKP’s murderous police. The fascist enemy of the people Tayyip Erdogan, who serves imperialism, had them kill him. Fascism is the murderer of Berkin. Berkin is the honourable stand of all the oppressed against imperialism. Now, after Berkin, it is Turkey that is resisting. For bread, justice and freedom. When our children die when they go out for bread, it is so that you can divide up bread equally and eat in freedom. All the peoples of Turkey are resisting AKP fascism and are resisting tyranny and fascism.

Berkin Elvan is our honour.

Berkin Elvan will live in our struggle for bread, justice and freedom.

Down with fascism, long live the international struggle of the peoples.

Down with imperialism, long live the struggle of the peoples who resist.