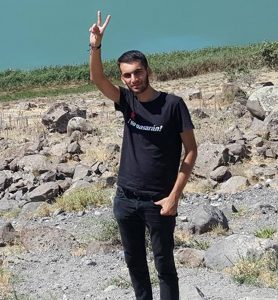 On Wednesday September 5th, our friend Ekrem Deniz Osmanoğulları and citizen of Holland that came to the 9th “Eyüp Baş” International Symposium to provide translation service, was arrested at the Istanbul’s Atatürk Airport as soon as it landed. The following day, September 6th in the evening he was arrested at the court where he was taken to declare. It was indicated that the reason for the imprisonment were “his posts on the social networks”.

The arrest of Ekrem Deniz without a proper cause shows the point which Turkish fascism has reached. The fascism of AKP imprisons everyone it gets hold of, and for this it not reluctant to produce weak facts that come close to obvious truths. In order to be imprisoned it is enough to possess revolutionary-democratic ideas, or simply to oppose AKP. The real reason for Ekrem Deniz’s arrest is exactly that.

As Anti-Imperialist Front, we’re no stranger to this type of AKP’s arrest attacks. Last year, a number of Anti-Imperialist Front workers were imprisoned in a similar way without showing any concrete fact. Cansu Güneş Seferoğlu, Lerzan Caner and lawyer Aytaç Ünsal are prisoners for a period close to a year. Okan Özer who joined works on the symposium last year, lawyer Naim Eminoğlu and Grup Yorum member Betül Varan who both went to the Democratic People’s Republic of Korea and shared his observations with the public, have paid the price for being internationalist with imprisonment.

We demand immediate release of Ekrem Deniz Osmanoğulları who was injustly imprisoned. We call upon all our friends: let’s expose this unjust, unlawful and arbitrary arrest, let’s bring Ekrem Deniz back to liberty!

FREEDOM FOR DENİZ OSMANOĞULLARI AND ALL ANTI-IMPERIALIST FRONT’S PRISONERS!
DOWN WITH IMPERIALISM AND FASCISM, LONG LIVE INTERNATIONALISM!

Stop Imperialist Expansion and Provocation! No to the Rearmament of Fascist Ukraine Against Donbass! US-NATO ...
By Revolutionary Youth London
February 14, 2022
Next Article:
September 7, 2018
min read
Social connect:
or