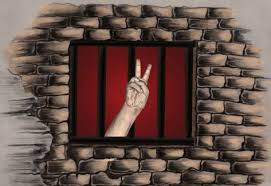 Are Suspects In Prison Dormitories Raided At Midnight Considered Human? Are The Dormitories Filled With “Criminal” Belongings?

In the recent period, sudden operational raids have been made on the dormitories in Greek prisons.

So if it matters, “the punishment is given within the punishment.” People in deep sleep, regardless of the health status of people who struggle with various diseases such as heart disease, panic attacks and asthma, are exposed to police terror in prison wards by being awoken by people wearing ski masks.

It is fascism for people dressed in ski masks who have forgotten their humanity to make them lie down on the ground,  carrying truncheons and shields, and who put them prisoners against the wall without making any explanation.

It is not looking for evidence of crime in the ward to destroy people’s belongings, damaging their food or drink.

As for what they consider as an element of crime, drugs, etc. – Instead of searching for materials in the wards, it should be investigated how easily these enter the prison, unfortunately, this has never been the problem of those who benefit from this market inside the prisons. Instead of persecuting vulnerable people with tied hands,  it should be easy to punish torturers.

Greece, which is a signatory of the European convention of human rights, violates the convention it signed. Article 3 of the Agreement – “No one can be subjected to torture or to inhuman or degrading treatment or punishment,” it says.

The Greek state should look at the environment it creates in prisons rather than seeking and investigating criminal instruments. Why are drugs so common? Why are people injured and killed? It is a conscious policy to put people who use drugs and those who do not in the same ward, to put a person who has received a small sentence and a person who has been sentenced for life in the same ward.

With the policy of “the best prisoner is the sleeping prisoner”, a state that runs a prison should look for the crime in itself, not the prisoner.

The state should pursue a policy that encourages more social activities, rather than creating prisoners sleeping with pills or drugs under the name of a policy of rehabilitation. Dishonest, vindictive searches that turn into torture should be ended.

Anti-Imperialist Front Participates in the March for Pavlos Fyssas, the Artist Murdered by Fascists in Greece