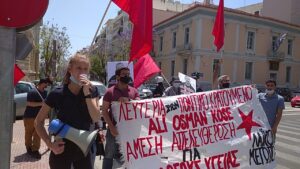 People’s Front  Greece went to the Turkish Embassy in Athens on May 25th to demand the release of a sick prisoner, Ali Osman Köse, who has been in prison for 37 years and has been in isolation for 22 years.
Ali Osman Köse spent 37 years as a prisoner in the prisons of fascism and has had many health problems caused by it and continues to live.

Although the hospital of the Medical Faculty of Trakya University said the operation was urgent, Ali Osman Köse still does not surgically remove the cancerous mass discovered at the end of February.

The collaborationist powers that implemented the policies of imperialism in our country, the regret of revolutionary prisoners in prisons, try all kinds of methods to surrender their thoughts and intimidate them from the struggle. From Guantanamo prison, to Germany and Latin America, to the Middle East, imperialism around the world applies its own policies and wants to characterize prisoners as remorseful surrendered. Isolation is torture and the practice of surrendering prisoners, ending their thoughts.

Ali Osman Köse free captivity of imperialism wants to end revolutionary captivity and surrender those who do not surrender.

Ali Osman Kose is being asked to be killed without treatment, the operation that needs to be performed for months is not being performed, while the decision to have emergency surgery is currently being made during the campaign process that our people have conducted in Europe and Turkey.

Revolutionary Prisoners Are Our Honor 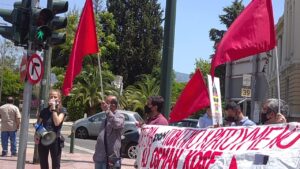