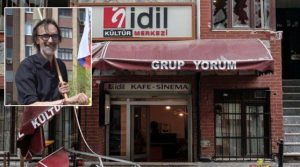 Gianfranco Castellotti and all arrested to be released immediately!

On October 4, 2018, Thursday at 11.00, Istanbul’s Idil Cultural Center was attacked again by the Erdogan regime’s police. Twelve people were arrested for no reason. The Idil Cultural Center is the place where the Grup Yorum is operating. One year ago, members of the group arrested on October 3th and 4rh were faced with charges of “terrorism”. The arrested in the cultural center Idil were present in the courtroom as a sign of solidarity with their friends. Among the arrested are other musicians from the Grup Yorum and member of the Anti-imperialist front Gianfranco Castellotti from Italy. Upon the invasion of the center, the police had abused some of the detainees and made material damage. The regime has not yet announced the reason of the attack and the arrests.

We urge the Turkish authorities to release all arrested immediately!

Erdogan’s regime to point out those guilty of police arbitrariness and injuries and material damage.

Anyone who wants to express it’s protest directly can write to the relevant responsible institutions in the Republic of Turkey:

Republic of Ministry of Justice

Report from the 9th “Eyüp Baş” Symposium: OUR UNITY GIVES US THE STRENGTH AGAINST THE IMPERIALISM!

Solidarity Statement For the Comrades Arrested In Istanbul [ENG/ITA]