Grup Yorum’s tour of Italy started on the 25th September in Rome and continued on the 27th in Cagliari, the 29th in Bari and the 2nd of October in Lecce.
The tour saw the Anatolian music collective in a dense activity of concerts, interviews and meetings with parties, journalists, radios, televisions and public.
Non-stop moments of strong connections with the people and each individual member of the group followed one another.
During the resistance in death fast of the people’s musicians Helin and Ibrahim, the people’s son Mustafa and the people’s lawyer Ebru, hundreds of thousands of people in fifty-one countries expressed their solidarity. In Italy there was one of the greatest expressions of internationalism.
Throughout the tour, our martyrs were remembered and the promise made before their death to increase resistance on all continents “from Anatolia to the Antarctic and from Antartic to Latin America” was honoured. In all the cities they were warmly welcomed and there were moments of strong unity especially during the songs of “Bella Ciao”, “Avanti popolo” and “This neighbourhood is ours” (Bu Mahalle Bizim).
Grup Yorum talked about the political repression, attacks and resistance they have experienced and are experiencing in Turkey and Europe, what are the reasons for their political and life choices. Furthermore, during the concerts appeals were made to all artists to unite against the common enemy: the Imperialism of the United States of America government, which – besides destroying its own people – is continuing to sow hatred, violence and wars all over the world, both directly and with its collaborators. Art can make a difference because it is art that educates, informs, and empowers people to resist against governments that apply destructive policies.
Grup Yorum wants to be a promoter force and catalyst for resistance and has organised a Symposium/Festival in Athens on 20-21 November this year to set up an International Front of Artists, so that there is no way for imperialist ideology to penetrate the minds of the people. 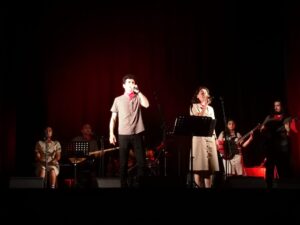 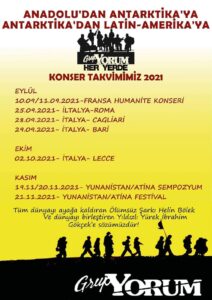 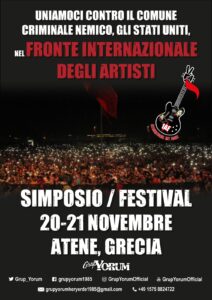