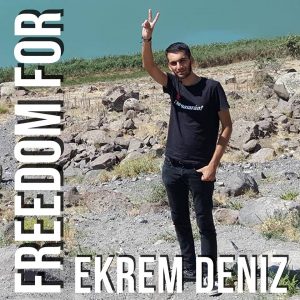 On September 5th our friend Ekrem Deniz arrived in Istanbul. As soon as he landed at Istanbul Ataturk Airport he was arrested and taken to a police station, without being given a reason. The following day, he was taken to court where he learned that he is accused of engaging in “propaganda on behalf of an illegal organization”. Deniz traveled to Turkey to be an English-Turkish translator at the 9th International Eyup Bas Symposium, an international event that tackle issues such as imperialism, repression and colonialism. He is a Dutch-Turkish citizen, who has struggled in the Netherlands against issues such as human rights violations, police brutality and racism, and for democracy.

The accusation of engaging in “propaganda on behalf of an illegal organization” is a common accusation in Turkey, that serves to imprison all opponents of Erdogan’s fascist regime. Since the 2016 failed coup attempt, after which almost 200,000 people were arrested, the Turkish regime does not bother to provide any pretense for arresting people, imprisoning them or detaining them indefinitely within the scope of the “State of Emergency”. A most notable example is that of the public sector workers, mostly intellectuals in education critical of the AKP regime, laid off in droves by government decree, and marked by the protests in Ankara’s Yuksel street – initiated by Nuriye Gulmen, an academic, and Semih Ozakca, a teacher. They were known democratic activists purged under false charge of belonging to the “Fethullah Gülen Organization”, the organization responsible for the coup. Their protest to get their jobs back has led to massive state repression, resulting in their imprisonment and trial. This case, which drew much media attention, was dropped, as the state’s prosecution was not able to provide or even fabricate evidence of any conspiracy to commit terror, even with the testimony of a false witness.

A similar pattern is apparent in the case of Ekrem Deniz, and we call for international attention on the below points demonstrating the arbitrariness of the judgement against him:

1- The original reason communicated to Ekrem Deniz’s for his detention was that he had not testified in a case opened by an Izmir prosecutor in 2017. According to Ekrem Deniz’s lawyer, the original file stated he was to be released after testifying. However, within an hour the prosecutor demanded that he appear before a judge for engaging in “propaganda on behalf of an illegal organization”.

2- The allegation is based on social media posts from an account which was closed over a year ago, there was no evidence presented that connects Ekrem Deniz to it, and the judge did not ask the prosecution to present any evidence. Regardless, the constitutional right to the freedom of expression was not even considered during the hearing.

3- The prosecution demanded a punishment of 1.5 to 4.5 years of incarceration even though such “offenses” rarely exceed six months.

4- Deniz was tried with the use of a video conference system called SEGBIS. He was not present in a courtroom, but filmed in a room with a live stream with a judge at a different location. The video connection was so poor and he was unable to even accurately hear the questions asked of him, much less defend himself properly.

5- Deniz has been judged for a “thought crime”; there is nothing “illegal” about sharing concerns about the rising repressive measures currently being implemented in Turkey. The Turkish regime, by incarcerating him for this reason, is guilty of suppressing the fundamental right to freedom of speech. By attempting to portray Deniz as a “terrorist”, the Erdogan regime is actually suggesting that all of its critics are guilty of “terrorism”.

We, the signatories of this statement, call for broad support of this campaign to Free Ekrem Deniz, and engage in actions to compel the Dutch state to exert pressure on the AKP government to free Ekrem Deniz. Ekrem Deniz, as an internationalist, stands by all oppressed peoples of the world. Our duty is to stand by him now.