On Saturday, June 6, at 6 pm, in Piazza Sant’Oronzo in Lecce, the Grup Yorum Solidarity Committee organized a solidarity demonstration to the Turkish Musical Collective Grup Yorum, in support of their just requests:

To carry out these demands, many Grup Yorum members went on hunger strike and two of them turned the hunger strike into death fast. Helin Bölek and İbrahim Gökçek became martyrs in April and May respectively. So that people would no longer have to starve to sing their songs, and recalling the fundamental rights of freedom of expression, the Grup Yorum Solidarity Committee called for this demonstration to which all free citizens and democratic associations adhered.

The Committee asks to:
*accept the demands of Grup Yorum;
*withdraw the Italian military from Turkish territory;
*stop the arms trade with Turkey.

LET’S NOT LEAVE THEM ALONE.
LET’S GIVE A VOICE TO THOSE WHO HAVE ONLY THEIR BODIES TO LET THE WHOLE WORLD KNOW THE CRIMINAL BARBARISM OF ĔRDOGAN AND ITS GOVERNMENT.
FREEDOM FOR ALL TURKISH POLITICAL PRISONERS.
STOP SELLING WEAPONS TO TURKEY.

In addition, in MARTANO (LECCE) on 4th JUNE red flags were raised, banners dedicated to the hunger strikers in Turkey, the martyrs Helin Bölek, Ibrahim Gökçek and Mustafa Koçak.
To the notes of Çav Bella, Uğurlama, Güleycan, Sevda Türküsü, the voices, the instruments, the soul of Grup Yorum.Helin, Mustafa, Ibrahim were there, with their proud looks, with their smiling faces, to remind us that solidarity is a very powerful weapon. Those who turned their eyes even and only for a moment to those banners or those who stopped to ask, to speak or simply to reflect in silence, those who were attracted by those songs never heard before, knew a story that they ignored and that tonight maybe they will tell to someone. It has grown and will continue to grow so this beautiful human chain, every link of which struggles and will fight for the freedom of Grup Yorum, with Helin, Mustafa and Ibrahim in the heart, always!

ALL UNITE!
We are right, we will win! 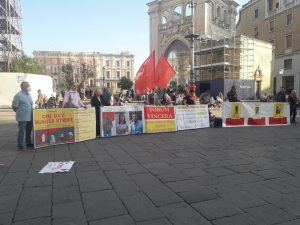 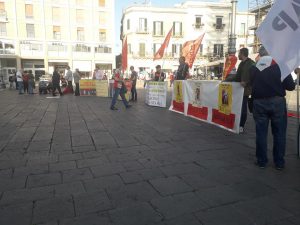 Freedom of the people artist Ali aracı, a member of the Grup YORUM