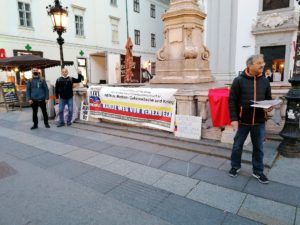 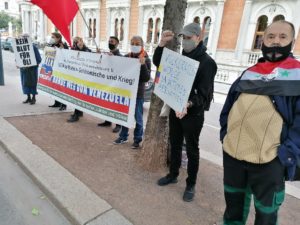 Today, on Wednesday, 7 October, a protest was held in front of the European Union Representation in Vienna against unlawful sanctions towards countries.
The action was organized by the ‘Unity Against Imperialist War – Hands Off Syria’.
The Venezuela Solidarity Group and Antiimperialist Front Austria also supported the action. In the protest, which started at 4.30 PM, ahead of Syrian flags, a banner was opened demanding end of sanctions towards Venezuela and end of medial propaganda lies, as well as posters writing “End the illegal sanctions” and “Hands Off Venezuela”.
At 5.00 PM a group on behalf of the “Alliance against imperialist War-Hands Off Syria” went in for an appointment with EU representatives and filed a petition against the sanctions policy.
In the meantime, leaflets containing the protest letter were distributed outside.
(We are publishing the petition text addressed to the Austrian Government, the European Commission and the Council of Europe.)
***
Directly after the action before the House of the EU, the Venzuela Solidarity group went for its weekly Wednesday action on Mariahilfler Street.
Between 6.00-7.00 PM, leaflets against imperialist sanctions and interventions were distributed in the street accompanied by Latin American revolutionary songs and many people were chatted about current issues.
ALLIANCE AGAINST IMPERIALIST WAR- HANDS OFF SYRIA

Petition against the policy of “Maximum Pressure” and “Unrestrained Sanctions”
“Maximum Pressure”, “Sanctions” and “Unilateral Coercive Measures” are cruel modern weapons of warfare by US and EU imperialism .
Governments and states that do not bow to the imperialist claim to leadership are first defamed as “regimes”, then taken under constant media fire by the imperial court reporters and should then still no “regime change” have succeeded, they are condemned to destruction through a blockade under “maximum pressure”.
The crime of this policy consists, among other things, in the calculation that the population of a country suffering from the blockade will ultimately rise up against their own government in order to ensure their survival.
In times of the corona pandemic, the interruption of medical care is a well-known even more sadistic method of the self-styled masters of this earth for the political destabilization and eventual destruction of the target country. A diabolical plan, against which every morally healthy person should actually immediately resist and also contradict everything that the responsible governments and European representations represent according to their own statements. Do not the most important religions, international law and the Universal Declaration of Human Rights also teach something about the right of all fellow human beings to integrity and is this not also found in the constitutions of the sanctioning states?
Currently, the USA and the EU are unilaterally threatening and damaging the following countries with blockades without the consent of the United Nations:
Belarus, Burundi, Central African Republic, Cuba, Democratic Republic of the Congo, China, Iran, Iraq, Lebanon, Libya, Mali, Nicaragua, North Korea, Somalia, Sudan, Syria, Russia, Venezuela, Yemen and Zimbabwe.
The EU is also supporting the starvation blockade against the Gaza Strip. Not a single one of these blockades complies with international law or the UN Charter, they are illegal.
The UN resolution (Resolution 30/12 adopted by the Human Rights Council on October 1, 2015) expressly affirms that
[…] no state may apply any kind of measure or promote the use of any measure, including but not limited to economic or political measures to force another state to submit, to deprive it of its sovereignty and to gain advantages of some kind […]
The rulers in Washington and Brussels cynically accept that the civilian populations of the sanctioned countries will be seriously harmed, that medical care will collapse, or that essential medicines and spare parts for the hospitals will be lacking. The destruction of the food and energy supply is not only accepted, but consciously used. We remember the blockade of Leningrad by the Nazis in 1944. There, too, the tactic of starvation was used, which, according to reliable estimates, killed 1.1 million people.
The US seems to have studied this tragedy carefully: the sanctions against Iraq alone have killed at least 1.7 million people, including more than half a million children. After these historical experiences, nobody can say anymore that he or she did not know the consequences of embargoes, sanctions and blockades.
We therefore call on the Austrian Federal Government, the European Council and the European Commission to distance themselves immediately from this inhumane policy. Furthermore, we call on the Austrian Federal Government and the European Council to build promising, positive political, economic, cultural and diplomatic relations on an equal footing with the countries now sanctioned under US influence and to respect their sovereignty unconditionally.

THE ITALIAN LAWYER IN MEMORY OF EBRU TIMTIK

Action in Athens for Pavlos Fyssas