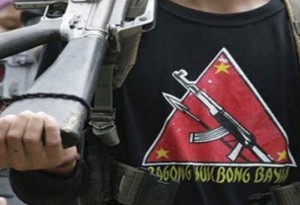 On the month of September, the New People’s Army from three provinces in North Central Mindanao Region successfully launched various military actions against soldiers of the 4th ID and their paramilitary troops. This month also witnessed the arrest of an army sergeant from the 26th IB and his detention as POW. Harassment operations were also launched against the rescue operations to the prisoners-of-war. Together with the region’s revolutionary forces, we would also give our salute to a comrade who offered his life during this period.

September 29, around 11 o’clock in the morning – a counter-attack was launched by an NPA platoon under Eastern Misamis Oriental-North Eastern Bukidnon (NPA EMONEB) Subregional Command against troops of the 58th IB together with the CAFGU who attempted in raiding the temporary NPA camp in Purok 2, Balahan, Mat-i, Claveria, Misamis Oriental. One Cafgu was killed and 4 members of the 58th IB was wounded on the said clash. Nothing was confiscated by the raiders and no casualties were suffered by the NPA.

September 22 – an NPA team under Mt. KitangladSubregional Command harassed soldiers from the 1st Special Forces Batallion in combat operation in Lantapan, Bukidnon. One was killed and three soldiers got wounded on this harassment.

September 21, around 6:45 in the morning – an NPA team harassed a column of troops under the 26IB in the mountainous part of Kamingawan, Brgy. Balit, San Luis. Five got killed and there were undetermined wounded reactionary troops on this harassment. A helicopter lifted their fatalities and wounded at around 4:00 o’clock in the afternoon.

September 20, around 4:30 in the morning – an NPA unit detonated a command-detonated explosive (CDX) to a platoon under 26IB who pursued the NPA forces which assailed Sgt. Bengil. The ambush occured in the midst of Km.13 of Barangay Policarpo, San Luis. Two regular soldier under the 26th IB and a Civilian Armed Auxilliary (CAA) were killed and four suffered wounds on this event.

September 19, 2015, around 10:45 in the morning – an NPA unit under Western Agusan Norte-Agusan Sur (NPA WANAS) Sub-regional Command successfully arrested and took Sergeant Adriano De la Peña Bengil (serial number: 831966) as POW on a checkpoint while riding a motorcycle in Km.16, Brgy. Policarpo, San Luis, Agusandel Sur. He is team leader of the Peace and Development Team (PDT) under 26th Infantry Battalion which conducted their activities in Community Organizing for Peace and Development (COPD) in Mahagsay, Agusandel Sur. He is now in the care of the custodial unit of NPA WANAS and is moved to a safe location due to the continuing rescue operations of the AFP. His family now has also received the cash through a local radio station worth P10,150 which he is about to deliver them during his arrest in the checkpoint .

September 13, around 8 o’clock in the morning – an encounter unintentionally occurred between an NPA team under Mt. Kitanglad Sub-regional Operational Command and the Licanay brothers who are both members of the Licanay criminal bandit group in SityoTandacul, Brgy. Lilingayon, Valencia City. The two died on the clash despite their first shot towards NPA members who they met on the forested part of the barrio. The 4th ID spokesperson used the bandit father of the two who died in order to spin a story that the Red fighters desecrated the bodies of the two. This is a desperate effort of the 1st SFB and the 4th ID in order to shield their liability for the massacre of five Lumad farmers in Pangantucan, Bukidnon last August 18.

Despite the more intensified counter-revolutionary attacks of the AFP against the revolutionary armed units of the NPA coupled with the attacks on the poor population who should have been the Boss, the revolutionary movement was never deprived of its initiative and determination to defeat the last card of the US-BS Aquino regime, the OplanBayanihan. These tactical offensives and those upcoming will be the region’s share in responding to the Communist Party of the Philippines’ call of exacting justice to the victims of instigated crimes by the AFP, paramilitary and bandit groups. The ruling system could not anymore impede the further expansion and consolidation of the revolutionary movement because they themselves teach the fighting people in building a liberating and just path which extremely contrasts the “straight path” of the reactionary Aquino clique.

In memory of Ernesto Che Guevara, killed in Bolivia 9 October 1967. Message to the Tricontinental(Eng/TR/Spa/Ita/FRA)