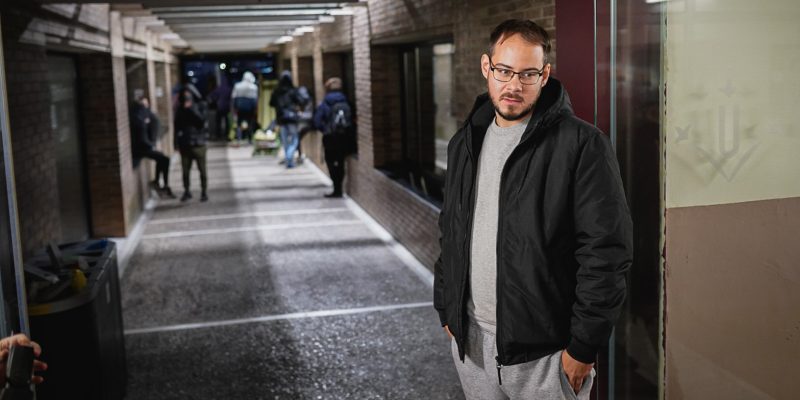 Exactly one year ago, revolutionary musician Pablo Hasel was imprisoned by the Spanish state. His crime was his art. His crime was singing about the truths uncomfortable to the oligarchy and the ruling elite. He was sentenced to prison for “insult to the Crown and state institutions” and for “apology of terrorism.”

Anti-Imperialist Front denounces Pablo’s persecution as an attempt to silence the voices of dissent, to send a message of fear to all those who dare speak up about the injustice, and above all–to those that dare do something about it.

The struggle of Pablo is the struggle of the Anti-Imperialist Front and everyone who wants social justice, a society without discrimination and exploitation, and fundamental democratic rights and freedoms.

We invite everyone to join our common struggle in Anti-Imperialist Front and Front of Revolutionary Artists, to defend Pablo’s rights–the rights of all of us together.

FREEDOM FOR ALL POLITICAL PRISONERS!

We are reproducing Pablo’s letter from behind the bars on the anniversary of his imprisonment.

AFTER ONE YEAR OF IMPRISONMENT

Today marks one year since the State imprisoned me for denouncing its well-documented atrocities. That was the only firm conviction for which I was kidnapped, but the mercenary manipulation media invented that it was for other reasons so that the lack of freedom of expression would not be more evident. The imprisonment provoked numerous and massive demonstrations, as well as an international scandal. Worried about such a huge response, they tried to stop it with all kinds of media intoxication against the demonstrators and against me, with powerful police terror that even mutilated the eye of a demonstrator, with numerous arrests and imprisonments and with the false promises of Unidas Podemos that they would repeal the crimes of expression and release me. But in spite of everything, the strong wave of indignant solidarity spread among broad sectors, aware that this was a serious and intolerable attack on collective freedoms.

Not only was freedom of expression demanded in many areas, but also the systematic violation of fundamental rights such as the right to decent housing and work, the right to demonstrate, the right to self-determination, etc., was denounced. The slogan of Total Amnesty, that is, the demand for freedom for all political prisoners, was also very present. In short, the protests pointed the finger at the entire regime as guilty of denying dignified lives and repressing the struggle for them. If the outbursts of rage – which in Catalonia lasted two weeks with great combativeness – did not last longer, it was due to the lack of more organisation. Otherwise, more could have been achieved, but it was no small thing that more of their covert fascism was unmasked, that there was much mobilisation at a time of great demobilisation or that so many of the above-mentioned things were vindicated. It was very positive that not only freedom of expression was being fought for. I decided not to go into exile in order to promote it more, but it would not have been possible without the invaluable daily work of organisations that tenaciously defend these demands. Organisations to whom – like so many others – I would like to express my gratitude for their show of solidarity, which also helps me to cope better with my imprisonment. Organisation is essential, because in the face of an oppressor so well organised to attack us, we can only defend ourselves if we are well organised.

I have recently received another sentence of more than 2 years, also for denouncing police brutality and their set-ups and sham trials to impose it with impunity. They want to add others for demonstrating or giving a concert. It’s a constant overkill to punish me for not giving in and terrorising others. Repression continues to increase with the so-called “progressive government” that not only has not repealed all the repressive laws it promised, but has also extended them. Demonstrating that it is not necessary for VOX to reach the Government for that purpose. Faced with this deepening of the curtailment of freedoms, we need to unite to resist regardless of the complicity that legitimises it. Their institutions are not going to solve anything or give in of their own free will, which is why it is urgent to take the mobilisation to the streets. It is important to spread the word about the mobilisations scheduled for this weekend and to attend them. Our future depends on the struggle.

One year later, I can say that I have been strengthened and reaffirmed even more. This has also been possible thanks to the example of resistance of numerous political prisoners who have been held hostage for many years for fighting for our rights and freedoms. Those who must be made known, those whom the state tries to make invisible and exterminate in its prisons. Repression can be turned against those who exercise it, as has been the case with many anti-people regimes that have been overthrown. It is up to us to put an end to such oppression. For my part, I pledge to continue to fight constantly from this trench.