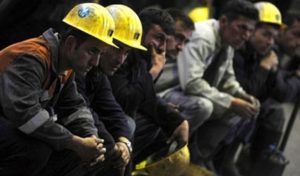 The miners of Soma, whose compensations weren’t paid, continue to resist for years. All of the actions, they carried out to make heard their voices and to get paid their compensations, have been prevented by the police. The sate security forces and gendarmes set up full-equipment barricades against them, attacking their families and children with tear gas.

The miners of Soma, decided to march to Ankara on the 12th of October

The miners, whom were prevented to demonstrate and attacked by police, were detained by use of torture. Nevertheless, the workers didn’t give up their right for demonstration.

They continued their march to demand accountability for the lives that were taken seven floors below ground.

“They say walk, walk. They say, walk towards hunger.

The black diamond has become a coffin, they say die if necessary.”

They said, We want justice against those who tell us ‘die if necessary’. They said, we’ll march for the severed leg of our friends, for their blackened lives, for those of us who didn’t see the sunlight and they march to ask accountability for them.

Against all repression and preventions, the miners have reached Manisa-Salihli. They set up a camp at the highway of Izmir and Ankara.

The miners, who shared messages on their Twitter account said “We’ll come again, we’ll march again and we won’t give up”.

The speech of the miners against the soldiers who seemed to come to war with full equipment​​​​​​​, has been heard all over the world.

“Those who do not and aren’t able to call to account the persons in charge, want to call us to account.

The state should not bring those to account who have been left blind and crippled, and those who have been mutilated, who have to continue their lives with sweat seven floors below ground.

The state should call the ones to account, who are responsible for that, if it is strong enough.

Will the state, which fails to call to account a single trifling boss, will test its power on us?

Is that right, regiment commander”.

The rage of our people comes out of the mines, of seven floors below ground, of factories and the black smoke. May the fear of the AKP government and its collaborating monopoly bourgoisy increase, our people become conscious to call to account, it takes to the streets, poverty and injustice will guide us to revolution.

There are two basic dynamics of revolution and the AKP government, TÜSİAD, MÜSİAD, whose hands are in the vineyard…. and our people come to call them to account.. our people who were kicked on the ground and whose childred were attacked with pepper gas.

They come while setting up their tents

to look for their rights and and to call to account

they come with the fire of resistance in the cold and frosty nights ..

We will achieve Victory with our Resistance.

Our People who have been murdered and deprived from their jobs

want Justice and they will Get it

The Resisting Workers Will Win!

SOLIDARITY WITH VENEZUELA AND THE PEOPLE OF LATINAMERICA