THIS IS THE AKP, THIS IS FASCISM!

THEY PUT DEMOCRACY SEALS ON OUR DOORS

THE SEALS ARE THEIR FASCIST AIMS!

YOU CAN SEAL UP OUR DOORS BUT YOU WILL NEVER GET US TO GIVE UP OUR STRUGGLE!

WE WILL RESIST! WE WILL NEVER GIVE IN TO FASCISM! 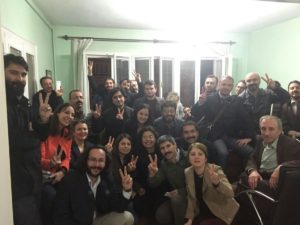 The July 15 coup attempt was turned by AKP fascism into an opportunity to step up its war on the people which grows more intense with every passing day.

After the July 15 coup attempt, it was announced as being “we suppressed the coup, now is the time to defend democracy”, and a “festival of democracy” was proclaimed. A lot of people called this the “spirit of Yenikapi” and many individuals, associations and environments said they were taking a stand against coups. It did not take long to understand what the “festival of democracy” meant. Their understanding of government not only did not cleanse away coups but actually returned to the practices of the September 12, 1980 coup. Today is the most blatant statement that the fascism that became institutionalised by September 12 is ripping away its mask and showing its face.

It is necessary to state events briefly from July 15 to today. They said they were declaring a state of emergency to suppress the coup. Their first work was to attack all revolutionary and democratic sections and all sections of the opposition. One by one they issued extraordinary decrees and they started to rule the country with them, as parliament, the focus of parliamentarism, was cast aside also. Thousands of people detained, many hundreds jailed. Thousands of members of the KESK trade union federation have been thrown out of work, opposition academics have been fired. Prisons have been turned into torture centres, newspapers and TV channels closed, writers detained and imprisoned… Now they raid our associations and offices and seal up the doors. Look well on this picture! This is not an image of democracy and freedom but September 12 and fascism!

While the CHD head office and the Ankara branch were having their doors sealed, a number of members of our association gathered in front of the police who were gathered outside theJustice School Association and the Ankara People’s Law Bureau and shouted slogans, the lawyers gathered inside the People’s Law Office when the police entered the building resisted. For hours the police tried to get in and CHD lawyers turned up to support the People’s Law Bureau. The resistance made the police take a step back, and they withdrew for a short time, but they came back with an order and tried to break the door down. This time the lawyers put up a barricade and struggled for a long time with the police. While we are writing this statement the police are still trying to get in and our collegues are resisting them.

PASHAS, BEYS, SULTANS ARE RIGHT TO BE AFRAID OF US! IF THEY ARE THE GRANDCHILDREN OF THE OTTOMANS,

“THE PASHA CAN ISSUE DECREES BUT THE MOUNTAINS ARE OURS” SAID DADAOGLU,

KOZANOGLU SAID “IF THEY TIED UP MY BODY PARTS, IF I KNEW HOW I WOULD LIE DOWN EVEN IN A DUNGEON”,

WE WILL WIN! BECAUSE WE ARE THE PEOPLE AND WE ARE RIGHT!

PEOPLE’S LAWYERS ARE OUR HONOUR!