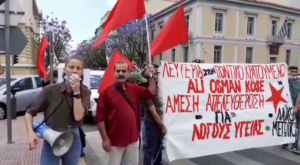 In Greece, the Ali Osman Köse Freedom Committee and the people’s front of Greece protested in front of the Turkish Embassy in Athens, Greece, for the right to treatment and release of the Revolutionary patient prisoner Ali Osman Köse.
Ali Osman Köse, a patient prisoner who was brought to the death limit by not being treated in the process of treatment in “Inside”, whose request to be treated “outside” by independent doctors was rejected, has been a prisoner in prison for 37 years. He has had many health problems with isolation torture and still has health problems.

It is AKP fascism and the Ministry of Justice that have brought the cyst region found in Ali Osman Köse’s kidney to such a deadly dimension.

Doctors have said that it will spread in a process between 2-4 years. Despite all the actions and protests and calls to date, the Ministry of Justice has not made a single attempt.

If you are a revolutionary, democratic and political prisoner, I do not give you the right to life.

Against this, revolutionaries, intellectuals, Democrats, our people organized actions by owning the Revolutionary patient prisoner Ali Osman Köse, and as a result of these actions and solidarity, Ali Osman Köse underwent surgery at Edirne Thrace university on May 31. 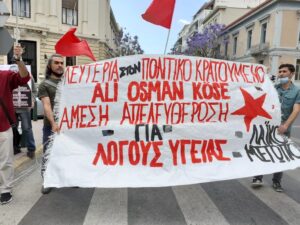