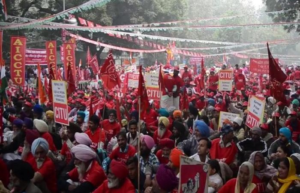 On 26th November, around 250 million workers in India took the streets to protest the budget cuts in salaries due to the government’s policies and the measures taken during the epidemic period.
In addition to central unions, mass organizations and professional unions also supported the strike.
Farmers who started to march as well to protest the new agricultural law were not allowed to enter the capital New Delhi and harshly attacked by the police.
10 central unions had made a central call for the strike, in which they stated that the strike included laborers from many segments such as public employees in the central and local government sectors, bank employees, industrial workers in the private sector, domestic workers, construction workers, agricultural workers, rural and urban tradesmen and even peddlers.
Following statement was made in the solidarity action at Bombay University, “This strike is being carried out against the devastating impact on health and the economy of the mandatory lockdown under epidemic measures. This devastating impact was exacerbated by a series of anti-people laws on agriculture and labor law enacted by the central government during the pandemic. In addition to the measures taken, the National Education Policy (YEP), which was tried to be imposed on the public during the epidemic, will irreversibly harm equality and accessibility in education.”
These are the strike demands of the trade unions:
♦ Laws prepared under the name of reform for agriculture and workers’ rights should be withdrawn,
♦ Stop the privatization of state enterprises such as public banks, railways, ammunition factories and ports,
♦ 7500 rupees (approximately $ 100) per month for all families who cannot pay income tax support, 10 kg of free food per person per month,
♦ Expanding the Mahatma Gandhi National Rural Employment Guarantee Law to 200 working days per year to include wage increase and urban areas,
♦ Withdrawal of the regulation that forces PSU (a type of sub-public enterprise) employees to early retirement
♦ Changing the National Pension System and granting everyone the right to a pension.
WORKERS OF THE WORLD UNITE!
DÜNYANIN İŞÇİLERİ BİRLEŞMİŞ!