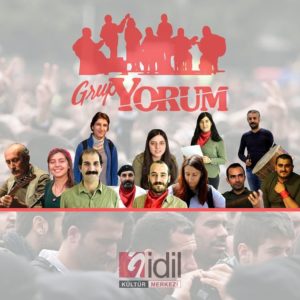 On October 28, 12 attacks were carried out, during which more than 100 democrat rebels were arrested, after raids on houses and chase in the middle of the streets. This operation, including the members of GRUP YORUM and the workers of the İDİL, cannot cover the crisis in which AKP is. An attack on GRUP YORUM has been going on for three years, which was curbed from the Death Fast of Helin and Ibo. Their voices resonated around the world.

The government could not bear to face our Political Victory, the People’s Choir, our exhibitions, the cultural magazine TAVIR and resumed the hunt against the People’s Artists. With our sacrifice we showed the enemy that we will not abandon the Case of our Peoples. Do not try our patience again! We will not hesitate to give our lives again, if necessary. We do not bend in the face of attacks!

You are Murderers, Cowards and Shameless!

The following are the names of the arrested members of GRUP YORUM, the People’s Choir and the workers of the İDİL cultural center: Ali Arcı

250 MILLION WORKERS ON A GENERAL STRIKE IN INDIA