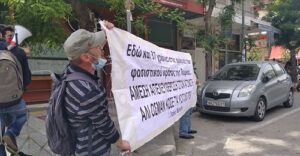 Action was taken in front of the Turkish Consulate in Thessaloniki for the release of the Revolutionary prisoner Ali Osman Köse, whom the fascist Turkish state tried to prevent and kill in all ways.

Thursday May Greek statement on the issue was often read to the people of the region through a megaphone while the same demanding banner was opened at 1 noon on Thursday, May 12, organized by the people’s front and the committee of solidarity with Ali Osman Köse.

Again, our statement was distributed by Greek friends who participated in the action to people passing through the region.

You cannot destroy the people with massacres! (For Colombia)

Banners demanding the freedom of the revolutionaries from Turkey, who have been imprisoned in Germany, ...
By AIF Greece
January 26, 2023
Next Article:
May 13, 2021
min read
Social connect:
or