Since the end of April, the puppet of US imperialism, the oligarchy in Colombia, has been carrying out massacres against the people protesting against the imposition of new neoliberal policies that shift the burden of the economic crisis onto ordinary people, and ultimately increase or at least largely preserve the profits of the capitalists.

To defend their social and labor rights, using their right to legitimate resistance, the Colombian people took to the squares and streets of the country.

The oligarchy and its political representation, in the person of President Ivan Duque, sent against the people first the police and then army units and fascist paramilitary gangs.

Everywhere in the world, when capitalism enters into a period of crisis, the bourgeoisie tries to put the burden on the workers, on the poor, and all the oppressed. In some places, these policies are being imposed without much resistance, but in some countries around the world, the peoples are fiercely resisting yet another plundering of what little rights they have left.

In neo-colonial countries like Colombia, the imposition of neoliberal policies can only be achieved through bloodshed. No matter how much the oligarchy and its political representatives declare that the issue will be resolved through dialogue and the search for consensus, no matter how much they give the appearance of making some concessions from their initially stated intentions, in the end, they always resort to the use of violence and terror against the people. Because otherwise they cannot hold on to power and do the bidding of their imperialist masters.

As we could also follow very closely from the history in Turkey from the past until today, there are also numerous examples of brutal massacres aimed precisely at imposing such neo-liberal policies, the essence of which is to make the poor even poorer and to further maximize the profits of the oligarchy and the imperialist monopolies it serves.

The current protests in Colombia are undoubtedly not new; we have seen protests erupt on several occasions in this Latin American country over the last two years. The situation of the workers in the country has been further worsened by the crisis and the pandemic. Naturally, the cause of this scale of the current protests is not only the imposition of new policies by the government, nor is it only the crisis and the pandemic, the causes are undoubtedly complex and deeply rooted in the structure of neo-colonial relations and the political and economic model imposed in the country, or other words, the root of the problem lies in the imperialist-capitalist system. It is there that the causes of this kind of protests and the discontent of the peoples’ masses throughout the world must be sought.

Imperialism has not changed, you cannot make “peace” with capitalism and fascism

Here we would like to pay special attention to the so-called “peace process” which culminated in the “peace agreement” signed in 2016 between the Colombian oligarchy and representatives of the FARC. Even before it was signed and in the period following its signing, Marxist-Leninists in Turkey repeatedly criticized this process and the policies pursued by some of the FARC leadership, which aimed at ending the armed struggle, capitulation, reconciliation with the oligarchy, and, ultimately, the destruction of the hope of the Colombian people for liberation from imperialism and fascism. The revolutionaries from Turkey have repeatedly reiterated in their analyses and appeals that these policies will ultimately lead to a catastrophe for the entire people and affect the struggles of peoples throughout Latin America.

One did not need to be a prophet to predict what would eventually happen. Everything which was written by the revolutionaries in Turkey, unfortunately, came true. Many of the former FARC guerrillas, leading cadres and prominent figures of the country’s leftist movement, were murdered in extrajudicial executions carried out by the forces of the Colombian oligarchy. These guerrillas, who have subsequently decided to resume armed struggle, are in extremely difficult conditions and their influence is limited. 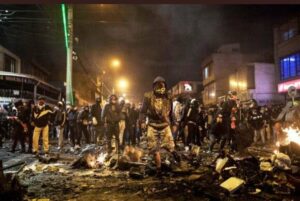 The events we have seen in the aftermath of the signing of the “peace agreement” and their escalation today are yet another example that policies aimed at reconciliation and capitulation to imperialism and oligarchy ultimately lead to more and greater sufferings for the peoples. The FARC leaders who signed this ‘peace agreement’ and those who directly or indirectly supported their actions are also responsible for what is happening now.

The revolutionaries in Turkey were right in their analysis, because they also saw in practice, and continue to see, what is happening in Kurdistan. As is well known, during the period 2013-2015, the Kurdish nationalist movement, also held ‘peace talks with the fascist oligarchy in Turkey, under the name of the ‘solution process’. However, eventually, the fascist oligarchy unilaterally ended the negotiations and started a new stage of its dirty war against the peoples of Turkey, and hundreds of people of Kurdistan and hundreds of guerrillas were killed in dozens of brutal massacres since 2015. The towns and villages of Kurdistan were turned into ruins, the mountains are being bombed to this day, and thousands were forced to flee their homes. The peace talks opened the way for further bloodshed.

If we have to summarise briefly so far, we can say that imperialism has not changed, neo-colonial relations have not changed, new methods and means are being added to them. The reasons which have forced the peoples of many countries of the world in the past to start an armed struggle against imperialism and fascism have not changed, on the contrary, they are increasing. The only hope for the liberation of the peoples is the struggle led by the revolutionaries. Anyone who tries to reconcile with imperialism and fascism pays too high a price for it, a price measured in the blood of the peoples.

Last but not least, we would like to express our support for the Colombian people in their struggle for rights and freedoms against the oligarchy, the puppet of US imperialism. It is necessary, as soon as possible, the government must repeal all the neoliberal policies against which the people have been protesting for several weeks. The families of the murdered, tortured, and disappeared must receive justice, and the murderers and the torturers must be punished for their crimes.

The only way in which the peoples of all the countries of the world can defend their rights and win new ones is to fight with all their strength and resources against imperialism and oligarchy. But for this struggle to be successful, it is not enough that it be waged in one country alone; it is of increasing importance in our time that the struggles of the peoples in each country individually must unite, just as the peoples were once united in the International. To be able to counter imperialism and its puppets it is necessary to unite our forces. Only in this way can we create a world in which there will be no poverty, no hunger, no misery, and people will not be killed and tortured.

The demands of the Colombian people must be accepted!

Justice for the murdered, the tortured and the disappeared!

You cannot destroy the people with your bullets!

Not reconciliation and surrender, but war until liberation!