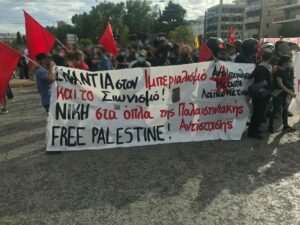 In Athens, the capital of Greece, the attacks and massacres of Zionist Israel against the Palestinian people, usually with the support of imperialism, and in particular with the support of US imperialism, were protested by rallies and marches.
At the Call of the Greek Left Party, organizations and institutions, the mass gathered at the Panarmou Metro stop on May 15, 2021 at 17:00 marched to the Israeli Embassy here. Throughout the March, slogans were chanted supporting Palestine and damning the murderous Zionist Israel. While the mass in front of the church cursed the massacres of Isaril with slogans, the Public Enemy of the collaborationist Greek government attacked the mass directly without warning, throwing pepper spray at the mass and trying to disperse the action by squeezing water with Tomas. Palestinians have been detained. In the collaborative Greek state, it protected Zionist Israel, which attacked the Palestinian people and killed the Palestinians, and attacked the Palestinians who suffered attacks and massacres, as well as the Greek people and Popular Front who participated in the action.

The people’s front of Greece and the Anti-imperialist front joined with the banner of the Palestinian people, who resisted imperialism and Zionism with a victory weapon in the struggle against imperialism. They carried red streamers. Greek and Arabic slogans were chanted in the action. 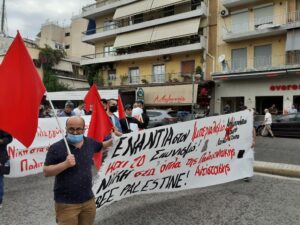 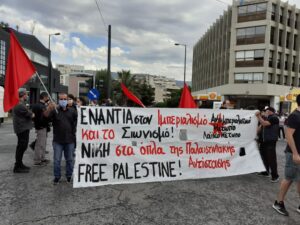 You cannot destroy the people with massacres! (For Colombia)