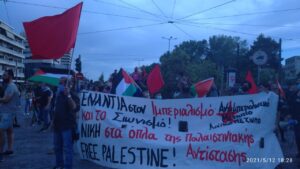 Zionist Israel’s Attacks and Massacres on Palestine Protested With Support of Imperialism At 6 p.m. in Athens, Greece, at the urging of Greek leftist organisations and parties and the Greek People’s Front, banners were unfurled in front of the consulate.

Palestinian flags were carried. Slogans condemning imperialism and Israeli Zionism were chanted. The Greek People’s Front and the Anti-Imperialist Front participated with the banner “Victory in the Fight Against Imperialism and Zionism belongs to the Palestinian People Who Resisted with Guns”. 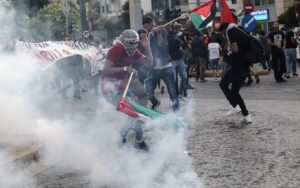 They carried red streamers. Greek and Arabic slogans were chanted at the protest. The Palestinian people living in Greece also participated in the action, and during the protest, the police, who blocked the road with riot police vehicles in front of the embassy, attacked the action several times.

Despite the mass police attacks, it did not disperse, continuing the action with slogans.

The action, which took place around an hour, was later terminated in a willful manner. 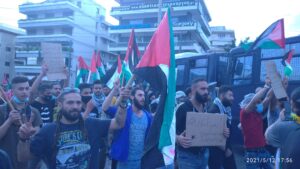