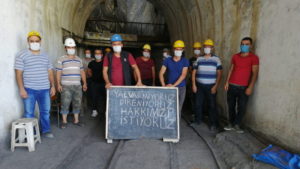 It walks on, crossing bridges, thinner than a hair, more sharply than a sword, breaking through the iron gates, tearing down the castle walls, it walks on with its feet covered with blood”. Nazim Hikmet

defined Turkey as a new colony of imperialism with fascism as its ruling form; while Georgi Dimitrov defined fascism as ‘the open terrorist dictatorship of the most reactionary, chauvinistic, most imperialist element of finance capital’.

The AKP government is also an enemy of the people, attacking the workers while defending the interests of the bourgeoisie and imperialism today. While the bourgeoisie adds profit to its profits, the people are forced to live in need of dry bread below the minimum wage. In order to prevent the accumulated anger of the people from exploding, all kinds of pressure and force are used, so that the people and laborers do not seek their rights.

In his speech of July 12, 2017, Erdoğan admitted that the emergency state (OHAL) was made in order to relax the business world, “We had a State of Emergency in Turkey when we took office, but all the factories were under the threat of a strike. Remember those days. But now we can take advantage from emergency state at all places that are threatened by strikes and we intervene instantly”, he said. 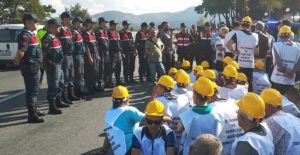 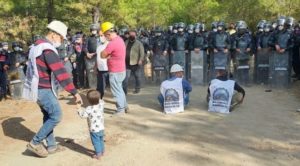 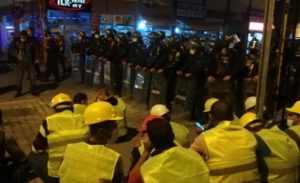 Despite all this oppression, torture and detention, the resistance of the laborers and the struggle for rights in our country continues. The Soma mine workers, the Ermenek mine workers, the mine workers who wanted to march to Ankara were prevented, tortured and detained by the AKP’s military police many times. But the workers continue their struggle despite all these attacks. The miners, who have been holding talks with the employer and the government through AKP politicians with the demand of getting their compensation, declared that the negotiations were inconclusive and decided to move back to Ankara from Soma Kırkağaç. Gendarmerie intervened many times against miners who started to walk to Ankara. The struggle of the miners who started an action because they could not get their salaries and compensations in the mine in Ermenek district of Karaman still continues. The mine workers of the Cenne mine in Karaman started a resistance to get their unpaid wages and compensations. Workers dismissed from the Cenne mine in Ermenek district without their rights, said, “We have no intention of losing our children’s sustenance to anyone. It has been a year, but we could not get our wages. We want the reward of our sweat. They employed people and didn’t pay their rights. When we come to seek our rights, we cannot find anyone responsible. Close to 500 people undergo enforcement measures. We don’t know what to do”.

The workers started resistance. Stating that they will move to Ankara if their demands are not met, the miners said, “Until now we have lost a lot, we do not want to lose our future. Either we will win or we will win” they say.

The AKP government, which condemns our working people to hunger, does not give our people their rights. We can only achieve our rights if we get organized and increase our organized struggle.

Today unions protect the rights of bosses, not the workers. They shrug off the accumulated anger of the workers with showpiece press

releases, and worse, they keep the anger of the working people within the boundaries of the order.

Our call to our working people is to win by organizing and fighting for their rights within workers’ assemblies.

We are not condemned to this order. We will build the future with our hands and break this robbery system.

We Are Workers, We Are Right, We Will Win!