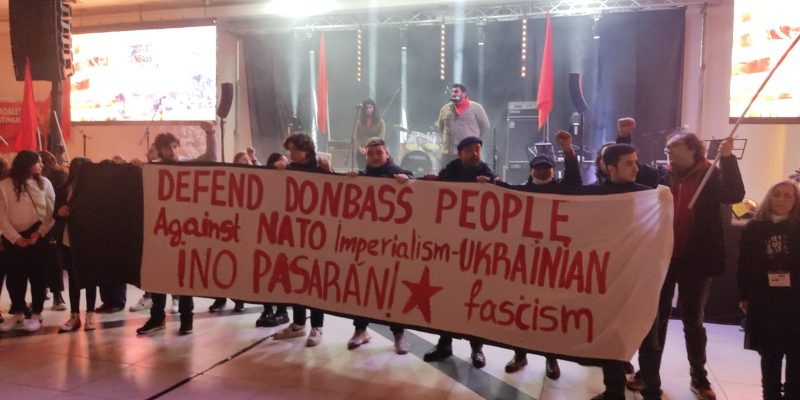 The Anti-Imperialist Front organized a Festival based on Justice and the fraternity of peoples in Paris on February 18 and 19.

There were panels and speeches on the first day of the festival. The second day was devoted to concerts. The Festival, which started at 17.00, consisted of 3 sessions. The first dealt with art, the second on political captivity, and the third on the aggression of imperialism.

As speakers, Selma and İnan Altın introduced the movie “Neighborhood”, which will be released in May.

The second session was the main session. Because the main agenda item of the Festival was “justice” and the subject of “political captivity” left its mark.

Just like Ali Osman Köse, the committee that fought for the freedom of George İbrahim Abdallah, who has been a political prisoner for 38 years and held hostage by French imperialism, took the floor.

Later, Mustafa Koçak’s lawyer, Ezgi Çakır, expressed the injustices he witnessed, whether as a lawyer or to defend his clients.

In the third session, Ahmet El İbrahim, the head of the Turkey desk of Syrian television from Syria, and Alexey Albu from the Borotba organization, who are living busy hours in Donbas, can’t joined.

Alexey Albu, on the other hand, was living a serious life problems at that time. Bombs were being thrown at their heads by the Ukrainian army. Alexey Albu was busy transporting his wife and children to the safe zone during the hours he was going to attend the panel. Thus, what happened in Donbas, which is thousands of kilometers away, was felt very closely at the Festival. Thus, the representative of Krasno from Belarus, who was in the hall at that moment, was be a single speaker of the panel.

Between the pieces, Hakan Akmaz gave a musical feast to the people.

The final was made by a folklore team playing “harmandalı”.

On the second day, there were concerts. But February 19 was also the death anniversary of Ulaş Bardakçı. That’s why the concert started with a moment of silence.

Later, Hakan Akmaz, brother of Gürsel Akmaz, who was martyred during the 2000-2007 Death Fast resistance, made the opening. Akmaz, who sang folk songs with his strong voice, received great acclaim.

After him, the French music group Group Barricade took the stage.

Barricade, a member of the International Art Front, colored the night with French Rock songs.

After that, it continued with international music. Yorgos and Sofia from Greece, who are also members of the International Art Front, took the stage. They adapted the well-known songs and folk music of Turkey into Greek.

At that time, while everyone was waiting for Grup Yorum to take the stage, AEC appeared before the public with an action.

The blood of the Donbas people, bombarded by Ukraine for days, was shedding. The imperialist media was trying to pretend that Russia was the cause of the aggression. He tried to attribute the aggression of imperialism to Russia.

While bombs were falling on the people of Donbas, we could not let the Festival run its course as if nothing had happened.

We should have also announced the attacks to the public there. That’s why we prepared a banner and, as youth and internationalists, we went to the front of the stage, chanted slogans for the people of Donbass and took action.

An AEC member took the stage and explained the reason for the action.

Finally, Grup Yorum, which the public was looking forward to, took the stage.

Among the parts of Yorum, this time “guest speakers” touched on some issues.

“Why Death Fast”, “Sick Prisoners and Ali Osman Köse”, 11 revolutionary prisoners in Greece were told to our people in the Paris leg of the “Long March”.

Also, to greet the Festival, George Ibrahim Abdallah, who had been in captivity for 38 years, sent a voice message. Our people were listened to.

The First 2 Weeks of the Long March Are Over. Where, what did we do? Here is our two weeks.

An online meeting was held on July 25 with representatives of Italian feminist associations and ...
By 1917soviet
July 28, 2022
Next Article:
February 24, 2022
min read
Social connect:
or