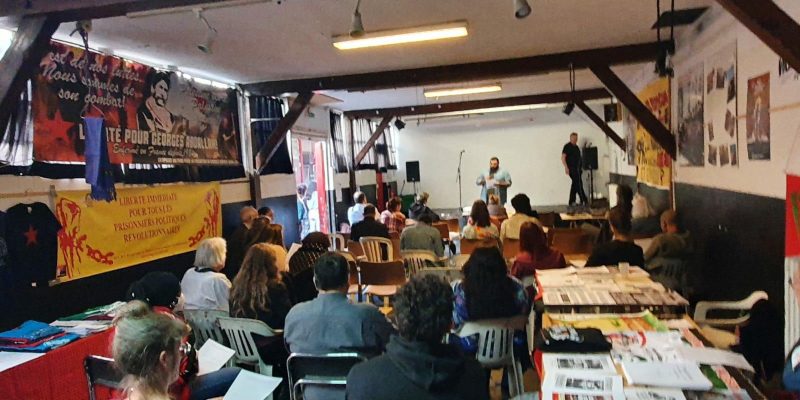 On April 17, the Freedom committee forGeorge ibrahim Abdallah and anarcho-syndicate CNT has organized an event for the Palestinian and all political prisoners around the world.

The event was started with the documentary titled “Fedayin”, which tells about the case and life of George Ibrahim Abdallah.

Then the representatives of the prisoners took the floor. Firstly, the opening was made with the message sent by Abdallah. In this message, he started and finished his words with the fast resisters Sibel Balaç and Gökhan Yıldırım.

After that, the representers of people of Palestine, Mexico, Nicaragua, Chile and Mapuche, Turkey, Corsica, Basque Country, Morocco, Sahara representatives of the prisoners hold a speech.

The AIF joined on behalf of Turkey. In their speech, the Anti-Imperialist Front emphasized the Death Fast resistance of Sibel Balaç and Gökhan Yıldırımın in particular. But sent also greetings to Abdallah, the Palestinian and all revolutionary prisoners. At the end of the panels there was a cultural event.

On Thursday, April 21st, a meeting was organized in Vienna to write to political prisoners internationally.