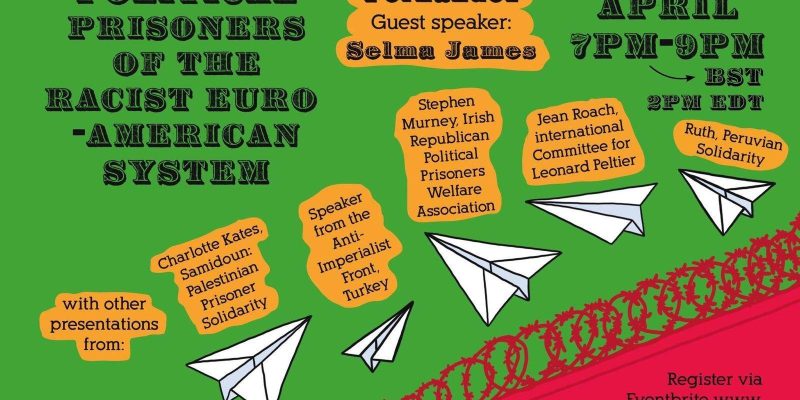 Online event organised by The Pan-Afrikan Society Community Forum and Free The Mumia Abu Jamal Campaign was held on 22nd April 2022 in honour of Mumia’s birthday on 24th April.

Issues faced by political prisoners and various campaigns still running to secure the freedom of wrongly accused and incarcerated prisoners were highlighted.

The injustice and unlawfulness faced by Ayten Öztürk was mentioned, who was handed over to the Turkish intelligence by Lebanon and who suffered 898 wounds on her body as a result of torture for six months in a secret center, and who was then arrested and sentenced to two aggravated life sentences after being imprisoned for three years, was given two aggravated life sentences. It was mentioned that 11 revolutionaries who were arrested because of the collaboration of the USA, EU imperialism and the fascism of Turkey and Greece were sentenced to 333 years in prison as a result of an unfair trial.

Current Death Fast Resistance of Sibel Balaç and Gokhan Yildirim were explained in depth including their demands. Sibel and Gokhan is resisting against injustices faced by the people of Turkey and attacks on the political prisoners. They both been sentenced by trumped up charges and secret witnesses. Their resistance is until victory or death. They defend the rights and freedoms of the oppressed people therefore it’s now our duty to defend their right to a life.

Case of 38 yearlong political prisoner Ali Osman Kose who has been kept under isolation for 23 years and as a result of the harsh isolation policies who has contracted many illnesses and lately diagnosed with cancer were mentioned and called on participants to support the campaigns for both Ali Osman Köse and Sibel Balaç and Gökhan Yıldırım.
In the speech made on behalf of the Anti-Imperialist Front, it was said that the common enemy is imperialism and whoever raise the flag of struggle against them and resist are terrorised, arrested and criminalised. A call made for a common struggle against the common enemy.

An online meeting was held on July 25 with representatives of Italian feminist associations and ...
By 1917soviet
July 28, 2022
Next Article:
April 24, 2022
min read
Social connect:
or