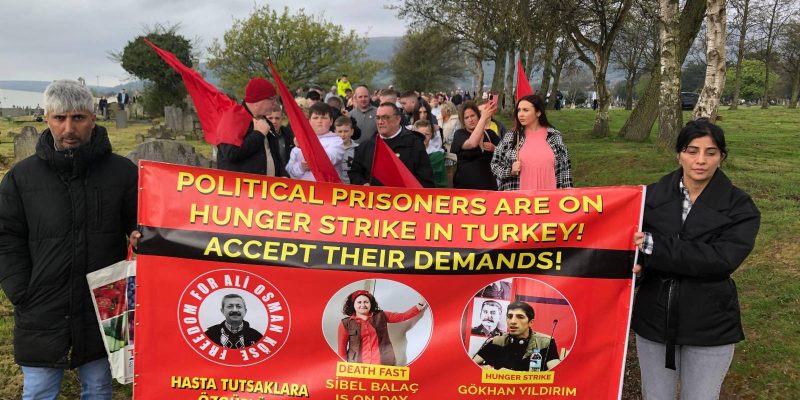 People’s Front carried the voice and demands of Sibel Balaç and Gökhan Yıldırım, currently on Death Fast Resistance for justice in Turkey to the people of Ireland.

Commemmoration of the 1916 Easter Rebellion is a tradition that goes on for many decades. Number of events were organised throughout Ireland from 15th to 18th April by republicans and revolutionary anti-imperialists to commemmorate those who fought and fallen but never surrendered against the common enemy, imperialism.

People’s Front issued a statement for this occasion and saluted the struggle of the Irish men and women against British imperialism.

Streets and people of Dublin, Belfast and Free Derry heard the honourable resistance of Sibel Balaç and Gökhan Yıldırım for justice and fair trial.

A public meeting was held at the club of Irish National Teachers Organisation and press statement was read together with a long standing comrade for the resistance in Turkey and a representative from Anti-Imperialist Action Ireland.

Offices of Google and Youtube was visited and the censorship of the revolutionary Turkish sites were protested. Offices of workers union SIPTU, Sinn  Fein, Connoly bookshop where MEP Mick Wallace and Clare Daley’s offices are based, Teachers Organisation and Irish Times were visited and leaflets were submitted. Constructive meeting was held with the representative of AIA and they will issue a statement for the Death Fast Resistance.

On the second day of the tour, offices of Republican Sinn Fein were visited. Death Fast resistance of Sibel Balaç and Gökhan Yıldırım were discussed in great deapth. Interview was made with Saoirse newspaper. RSF presented the delegation with a woodwork of their recently released prisoner to be send to TAYAD in Turkey (Families and Friends of Prisoners Association). RSF will make an official statement in support of the resistance. Three comrades from RSF declared that they are on 1 day solidarity hunger strike at the same time of political prisoners around the world in support of the death fast resistance in Turkey.

Memorials and graves of leaders of the republican resistance, James Connolly and Michael Collins were visited and they were commemmorated.

People’s Front took part in a commemmoration event organised by Saoradh at Sutton Cross-Dublin where the memorial for overseas fighters for the republican resistance is situated. This event was signaficant because in this area there wasn’t any event organised for many years. Streets of the route to the cemetry was decorated with “Unfinished Revolution” placards along with flags of Ireland. At the cemetry People’s Front addressed the participants. Flower was placed at the memorial and the statement was read. Informative meeting was held with Saoradh and Irish Republican Prisoners Welfare Association (IRSPW). Called on them to support the resistance and make an official statement.

People’s Front attended the commemmoration event of Repuclican Network for Unity and Irish Republican Socialist Party at the Milltown Cemetry. Remenance and solidatity of the people of Ireland for the Great Death Fast Resistance of 2000-2007 in Turkey, where 122 political prisoners died resisting against F Type Isolaton prisons were still alive. People who organised the solidarity events at the time once again stood in solidarity with the resistance. Statement was read at the both events and leaflets were distributed.

Grave of Bobby Sands and his friends were visited.

Resistance of Bobby Sands and his friends has been a beacon for the struggle of the political prisoners for many years. People’s Front opened a banner on the pavement when the march of Sinn Fein was entering the cemetry and leaflets were distributed. Interviewed by a journalist for German left newspaper Junge Welt.

Meeting was held with IRSP representatives and they will also actively support the resistance and make an official statement.  Office of BBC Ireland were visited.

Free Derry – Last day of the visit was in the city of Free Derry.

Two to three thousand people took part in the commemoration event of Saoradh started at the Free Derry Corner where colour party representing the guerillas of the republican resistance led the march. People’s Front placed a wreath and addressed the crowd at the memorial in the cemetry. Leaflets distributed and many people congratulated the speech.

Despite the peace process and surrender of some of the organisations in Ireland the struggle in Ireland is still alive. People still follow the footsteps of their resistance fighters and leaders. The values and tradition of their sacrificies are reclaimed by the people and the fight against fascism and imperialism still continues.

During the tour around ten to fifteen thousand people heard the voice of the resistance. One thousand leaflets were distributed and around two hundred posters were placed in the streets of Ireland.

We salute the Easter Uprising 1916 and it’s legacy that is still been reclaimed by true anti-imperialists and revolutionary republicans. We honour the martyrs of the Easter Rebellion and republican movements that has fought against the British imperialism and it’s collaborationist entities. We salute the Irish men and women tirelessly fighting the brutality and attacks of the imperialism.

We send you the revolutionary greetings of the people of Turkey fighting against fascism and imperialism. The struggle of the revolutionary movements in Ireland and the legacy of James Connolly, Bobby Sands and their comrades has shone a light to our struggle for many years.

People of Ireland has always been supportive of the struggle for justice in Turkey. We have witnessed this during the great Death Fast Resistance against the isolation plans of political prisoners, where fascism in Turkey obeyed the demands of imperialism and built F type prisons just like H Blocks to surrender the political prisoners. To strip them off from their beliefs in socialism and freedom. From 2000 to 2007 political prisoners opposed this attack and 122 died during Death Fast.

Today political prisoners are again under heavy attacks and brutality against them continues at barbaric levels. Their rights are violated and prisons became a place where hundreds become sick and die in vain. People are arrested with fabricated digital evidences, secret witnesses, trumped up charges and statements of slanderers. Enemy laws are implemented where the rule of law of the land and universal laws are violated.  Political prisoners that became sick due to heavy isolation policies are either not treated or their treatment is arbitrarily delayed. They let political prisoners to die. Ali Osman Köse is the single example of this. He has been in prison for 38 years and contracted many illnesses and finally he became ill with cancer. He is not fit to stay in prison, but fascism denies him his right to be freed under the laws. Rights of prisoners are violated arbitrarily and disciplinary proceedings results in years of visit bans, withdrawal of publications send to prisoners and solitary confinement for many months and years.

Due to these planned attacks against the people and political prisoners, revolutionary and political prisoners Sibel Balaç and Gökhan Yıldırım has started a Death Fast Resistance. Special needs teacher Sibel, who has been arrested and imprisoned because of her support for the workers and academics purged after the farcical coup in 2016 is on Death Fast since 19th December 2021. Gökhan Yıldırım, whom started his Death Fast Resistance on 26th December 2021, before his incarceration he has been actively fighting against the degeneration policies of the fascism within the poor neighbourhoods of Istanbul.

His fight against drug lords and gangs has given hope to the people and empowered them to fight against the policies of fascism and for their rights and freedoms. They have imprisoned Gökhan to 46 years to stop his fight against injustices and to threaten the people by saying this is what will happen to you if you oppose our ruling. Those who is responsible to poison our people and the youth are supported and revolutionaries imprisoned. The ministers of ruling party AKP government involved in drug trafficking, which has been exposed must be put on trial and imprisoned not the revolutionaries. Resistance of Sibel and Gökhan is reaching the critical levels. Their demands are;

1- Release those arrested on the grounds of digital evidence.

4- Use of single cell prisoner transport vehicles must be abolished!

5- Prisoners should be given books and publications unconditionally!

7- Right to 10-hour conversation amongst prisoners must be implemented!

8- The drug lords and mafias must be put on trial and sentenced.

These demands are humane and legitimate.

We call on people of Ireland to stand with Sibel and Gökhan. We request you to contact your representatives and ask them to put pressure on fascist Turkish government and demand them to accept their legitimate demands.

It’s up to us to save Gökhan and Sibel from the claws of fascism. Call and send protest messages to Turkish Embassy and Ministry of Justice of Turkey.

International solidarity is the hope and power of the oppressed people.

Silence Kills, Solidarity will save them.

Once again we salute the struggle of the people of Ireland for independence and freedom and those fell as martyrs in this honourable struggle.

An online meeting was held on July 25 with representatives of Italian feminist associations and ...
By 1917soviet
July 28, 2022
Next Article:
April 25, 2022
min read
Social connect:
or