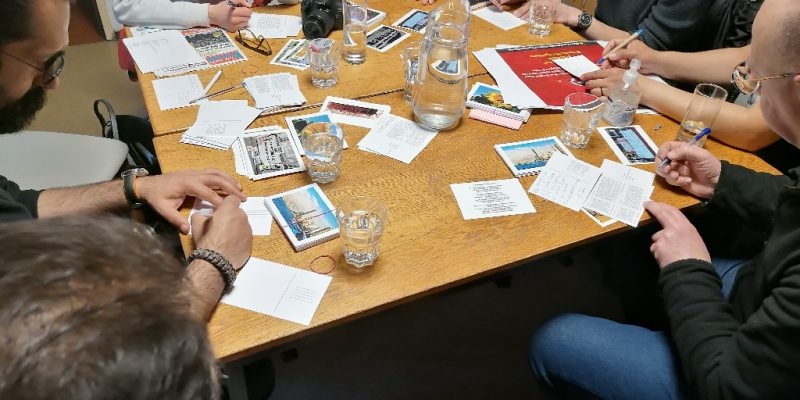 In the beginning short background info was given about some of the prisoners, including a report of the situation and peasants struggle in India.
While writing to different prisoners, the participants helped each other to translate some of the messages into the native languages of the prisoners.
Natural photographs were selected for the cards, with f. e. landscapes from Cuba, Lebanon, Palestine and also some pictures taken during solidarity actions for political prisoners.
Around 25 cards were written during the meeting.

This international example will be repeated once every month, in order to not only express and share solidarity with prisoners, but also to strengthen ties and to learn from the different popular struggles in other countries.

who sacrificed her life on April 5th, the day of lawyers. “

The solidarity organisation with political prisoners in Greece wrote graffiti for Sibel Balaç who is ...
By AIF Greece
October 5, 2022
News

Gökhan Yıldırım,whom recently won victory with his Death Fast Resistance and released along with İleri ...
By AIF Greece
October 5, 2022

The list of participants of the Symposium to be held by the Anti-Imperialist Front on ...
By AIF Greece
October 5, 2022

The preparations of Anti-Imperialist Front 20th Anniversary International Symposium to be held in Athens on ...
By AIF Greece
October 4, 2022

The mass work for the Anti-Imperialist Front symposium to be held in Athens on October ...
By AIF Greece
September 29, 2022

We send our profound solidarity and stand against the vile impending decision of extradition of ...
By AIF Greece
September 29, 2022