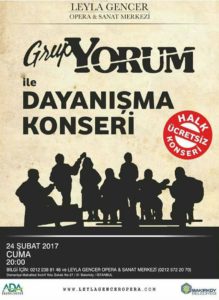 The members of Grup Yorum, which is presenting the voice of the peoples, are imprisoned in isolation cells since 18thNovember, unjustly and without legal basis.

With the proclamation of the emergency state and the daily released emergency laws the attacks on the level of arts have been increased frequently.

Several arts institutions were closed, monuments were knocked down, plays and concerts were prohibitted and artists arrested.

The place of Grup Yorum, which is creating new “Ince Memeds” against the emergency laws, are the stages and squares…

No repression so far could stop the work and the progress of the group.

Its members even produced instruments inside the prison by using razors and continued their work.

While saying “They don’t give us our tuners, if necessary we’re going

to take the chordals from the noise of the birds”, they demonstrate from within the prisons, that they’d never end production and never stop to compose songs.

Yorum, which is called as a “snow maker” by its fans, will continue to sing its hopeful songs as one of the significant names in the revolutionary world music.

On February 24, we, local and international artists will come together to support the voice of Grup Yorum.