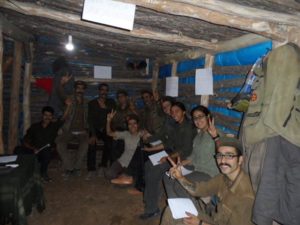 Anatolia wants a solution to shortages and hunger
Anatolia Wants Democracy Against Fascism, Justice Against Massacres
Anatolia Wants Independence Against Imperialist Occupation
That’s why Mahir, Leyla and Oguz, are in the mountains, that’s why they’ll be in the mountains. Fascism has turned Anatolia into a lake of blood.
Fascism has turned Anatolia into a torture centre, a prison. Fascism has made Anatolia the country of the poor and the hungry. Fascism has turned Anatolia into the hell of drugs, the hell of prostitution where women’s bodies are sold, in a market of human beings.
Those who, like Leyla, Oguz and Mahir did not accept this national panorama, went to the mountains because they wanted to change it. New people like Leyla, Oguz and Mahir who do not accept this national panorama will continue to go up to the mountains to build up the hope of liberation for our people.
Let’s see what fascism has done for us in a year:
Murder in the streets, in the mountains, in our houses … Murder while at work!
In the year 2016, for not obeying the order to stop or as a result of indiscriminate fire, 341 people were killed, 396 people were injured.
Workers in the mining sector were back in their mine shafts. In Sirvan, 16 workers were trapped underground.
In Adana they burned our children.
According to data from the health and safety at work assembly, up to December 1, 2016, 1,816 workers were killed.
They torture, detain and imprison.
1,622 persons, in detention and outside places of detention, were subjected to torture.
From July to now more than 90,000 people have been detained. More than 36,000 people were arrested. More than 100,000 journalists and writers were arrested. At the moment 146 journalists and writers are still under arrest.
10 members of parliament and 50 mayors have been arrested.
The total number of prisoners in prisons in Turkey exceeds 200,000.
As a result of the attacks on meetings and demonstrations, about 1,500 people were injured. 352 meetings and demonstrations were attacked.
There are hundreds of thousands of court charges pressed against artists, illustrators, actors, academics, writers and journalists.
They make us emigrate from our homes, from our land.
As a result of the prohibitions on going out into the Street, 500,000 have emigrated from their homes.

Ten minutes passed as we moved away and there was a sound of bombs, they dropped them on our shelter, yes, if we had not gone away we would have been bombed
…
Now the Cobra helicopters are spraying machine-gun fire around…
Under the bombs and the bullets hiding under the trees, crouching, dragging ourselves, walking step by step we walked away.
We arrived at the reserve shelter, we took some necessary food supplies and we went our way … Safak’s face and his left hand, my face, my hair and my right hand had burned completely.
…
The enemy is not very intelligent, everything comes from the gaps that we left. The enemy is fearful and pathetic. They did not go to the place where we were, they did not disembark by helicopter, they did not have the courage to confront us, the guerrillas of the DHKC, nor will they. They bomb, they spray gunfire, they burn. They are so cowardly that they burn all the mountains. Only after that did they disembark, and then they left quickly.
…
What can three unarmed guerrillas do?
There is nothing that a guerrilla cannot do with will and faith. We went very far from our bombed camp. Although we walked far away we could see the smoke and the flames coming up. We stayed in places of thick forest. At night the air was like ice. Trembling we tried to sleep.
…
For three days we did not go to the bombing site. Does the enemy continue to machine-gun and search there? Will soldiers descend? We did not know. Again on November 9 we went directly towards there in the evening. On the night of November 9, when we entered that valley again, the flames were still burning.
Let’s go to the villages for news and some necessities, we said. And also go to the areas where our other guerrillas are, we can have news, we think. The one who knew the area best was Safak, but Safak’s glasses were broken and he could not see. Where was there a summit, he asked, where was there a path, he asked and when we answered he said, okay, then we will go here. We walked for four days, three guerrillas without weapons.
…
We saw in the eyes of our people the confidence they feel in us.
We entered a village.
“How did you get out of that fire? We saw from here the flames, the smoke, it burned for days, how many bombs did they drop? How did you survive? They looked at each other in great confusion.
…
In another village …
They gave me clothes, I changed and dried. We take bread with sugar.
…
The leaves fell and all the places opened. It snowed on the peaks. The moment the guerrillas retreat to the shelters.
But we could not stay. We passed places where we reached a summit, we looked, in front of us a barracks. We pass another summit, a village is seen in the distance. In a short time we passed dozens of places and villages … And without weapons …
…
We learned many things. What gives us strength is our fallen and our movement.
We talk a lot. We could have said, come on, let’s go to town and in the spring we will come back, but something like that did not happen to any of the three. None of the three of us thought of leaving the mountains and going back to wait, why? We talked about it. Of course, faith and the desire to be accountable for our martyrs, we said.
We had no weapons, we went to the villages and we sought air rifles, we asked to go to the areas where other left-wing groups were found, we looked for them, if we had found them we would have asked them something, even if we did not find them in caves and similar sites, but we never thought of leaving this place. Ten days went by and we said, Let’s go to our shelter and see, maybe under the ground are our fallen, perhaps we can reach our weapons. Yes, we were there. Who knows what we would find.
…
Ten days passed, we were going there. Even smoke rises and there is still a smell of burning. We entered carefully and the whole valley was full of smoke. It was upside down.
…
So the bomb fell on top of the big shelter. That is why we are saved. And we crawled inside. Their weapons were whole. After 10 days of wandering without arms we experienced the happiness of reunion with them.
…
I love you very much, my people, my organisation, I love my colleagues very much.
I have you all before my eyes …
We are not alone here, we are with you. We will continue to boost hope … Do not worry about us … Take care …
With faith in asking for an account for our martyrs again, and with enthusiasm I embrace you …
WAR UNTIL LIBERATION
WITH RESPECT…
The comrades who were in the shelter during the bombing of November 7;
Kenan Gunyel,
Mustafa Dogru,
Huseyin Gulmez,
Tuncel Ayaz,
Murat Gun,
Melih Isik,
Bunyamin Kilic,
Naciye Yavuz
Hunkar Derya Gunes,
Aysun Saban