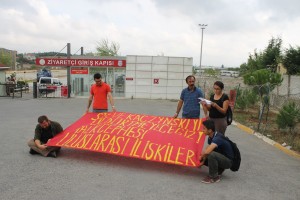 People Front Comitee For International Relations members made sit in protests in front of Maltepe prison in 9 August. First Comitee members read statement about Steve Kaczynski conditions and reasons why they pressure aganist Steve.  After read the statement comitee members sign “Defol Amerika” march and begin the sit in protest..

AKP police came in front of prison with 4 armored car , 1 panzer and 50 police who wear steel vest.. When sit in protest continue police attacked comitee members and detained 6 revolutionaries. They re afraid of international struggle s power. All revolutinaries released after the custody procedure.

We re saying that if imperialism oppression people, we will fight aganist with our lifes. Steve Kaczynski is honour of anti imperialist struggle!