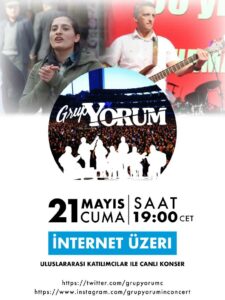 With music and speech contributions from artists of different countries, the revolutionary band from Turkey will meet again with its fans and fellow artists.

The concert was already planned for the closing program of the “International Symposium for Justice” in early April, which should have taken place in Paris.

However, due to the lockdown announced at short notice, it was postponed and the band will perform live on May 21 in a studio in Paris with some local bands and a wide range of musicians from various countries who will join live via the Internet.

In Turkey, the government has been acting for years with massive repression and also all possible official means against band members to prevent their concert performances and meetings with the population.

A primary goal, besides ending the repression and criminalization of its members, is above all to be able to hold concerts again in large squares in Istanbul, as before in Bakirköy with millions of people.

For Grup Yorum members Ibrahim Gökcek and Helin Bölek, it was indeed an existential demand that the concert bans be lifted. They have staked their lives for this demand and the right to free art to be heard worldwide. Both died in a death fast in 2020.

Some words of the bassist Ibrahim Gökcek that will remainin in memory were: “From Anatolia to Antarctica, from Antarctica to Latin America…. Grup Yorum cannot be silenced”.

The concert of his bandmates is intended to express the power behind these lines and the internationalism that has also marked the history of the band since the 80s. Grup Yorum has not only tried under hard conditions to reach people with their meaningful songs, but it also advocates for a unity and an alliance of progressive artists.

The outstanding solidarity with Grup Yorum from artists all over the world, which will also be shown in the course of the upcoming concert, could be seen as another step towards the international union of artists.

In addition to musicians from Greece, Italy, Russia, Catalonia and France, the Chilean guitarist and singer-songwriter Nicolas Miquea, who lives in Germany, and Diether Dehm, artist and member of the Bundestag for the Left Party, will also participate.

Family members of Ibrahim and Helin are also expected to join the program live.

The concert can be followed free of charge via the following Internet link:

For more info and updates visit:

May 9, 1945 In Greece, 76th Anniversary Of The Victory Over Fascism Year rally and March held